In May 2011 Rayo Vallecano was 22 million euros in debt. It had just entered bankruptcy and the players had gone unpaid for much of the season, but the barrio of Vallecas in the south east of Madrid was full of many happy faces. You see the club had just won promotion to La Primera and just as importantly, Teresa Rivero Sánchez-Romate, or Dame Teresa, was no longer President. Happy days indeed. It wasn't the first time that Rayo had reached La Primera, they had won promotion on five previous occasions and have now clocked-up a total of 15 seasons in La Primera. However, given all of the off-field distractions, this latest promotion was the least expected and above all, the sweetest ascent.
The story of Rayo Vallecano goes back to 29 May 1924 when Agrupación Deportiva El Rayo was formed. Rayo is Spanish for lightening and the club kicked around the local leagues for the next 20-odd years, one of many small clubs in the Vallecas district that was quickly being absorbed by the capital. Home in those early years was the Campo de la Calle de las Erillas, which stood around 300 metres west of their current home. In 1940, the club moved to  the Campo de El Rodival and by 1947, they were the district's senior team and had changed its name to Agrupación Deportiva Rayo Vallecano. Two years later Rayo played the 1949-50 season, their first in the Tercera, as a subsidiary of Atlético Madrid. The club also adopted its distinctive red sash in 1949 after receiving shirts from Club River Plate of Argentina, who had used the El Rodival for training in the lead up to a friendly with Real Madrid. El Rodival remained the club's home ground until the mid fifties, then for a couple of seasons, the club led a nomadic existence until the renovation of Campo de Vallecas, the former home of Atlético Madrid, was complete in December 1957. The handicap of not having a permanent home did not hinder Rayo as the club won promotion to La Segunda at the end of the 1955-56 season.
The stay in La Segunda lasted five years, with a highest place finish in 1959-60 of fifth. Relegation followed in the following season, but four seasons later Rayo returned to La Segunda in style. The 1964-65 season saw Rayo play 30 matches, score 102 goals and become the first club outside of the top flight to remain unbeaten. You can read about this remarkable season here. Back in La Segunda, Rayo had a look of permanence about them and the club was soon establishing themselves as one of the front-runners in the division. Fourth place was achieved in 1967-68 and the club was not out of the top ten in any of the first eight seasons back in La Segunda. In October 1972 the club moved away from Campo de Vallecas whilst a new stadium was developed on the site. For three and a half years they played their matches in the centre of Madrid at the Campo de Vallehermoso. Form dropped a little whilst at Vallehermoso and in 1975 Rayo had to overcome UP Langreo in a relegation play-off. Finally on 10 May 1976, the Estadio Nuevo Vallecas opened with Rayo winning 1-0 in a league match against Cádiz. Meanwhile, Campo de Vallehermoso, which was stood just a mile or so south west of the Bernabéu, saw out its days as an athletics stadium until it was demolished in the autumn of 2008.
Under the management of Víctor Núñez and buoyed by the momentum of a new stadium, Rayo remained unbeaten at home throughout the 1976-77 season, which is just as well considering their very ordinary away form. A points total of 45 was two clear of fourth placed Real Jaen and secured Rayo's first promotion to La Primera. Their impressive home form continued during their first season at the top level, with reigning champions Barcelona and champions elect Real Madrid losing at the Estadio Nueva Vallecas. The only defeat came at the hands of relegated Elche CF. Away form was still a problem however, with Athletic Bilbao and Valencia handing out drubbings. In the end, Rayo finished a very creditable tenth place. The 1978-79 season proved altogether more difficult for Rayo as clubs began to find a way of returning from Estadio Nuevo Vallecas with points. In the end, despite continuing poor away form, which included a 0-9 tonking at Barcelona, Rayo hung on to their top flight status by one point. The end to their first visit to La Primera came at the end of the 1979-80 season when a total of 26 points saw them finish in sixteenth position. 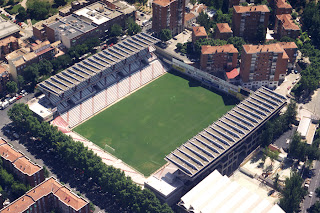 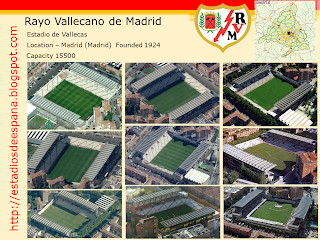 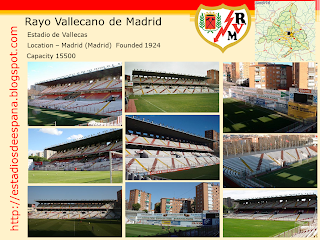