Okay, the story so far… The town of and its football club are on the up and progressive president Manuel Martinez Valero wants to move the club to a new stadium. What could go wrong? Well quite a bit actually. For starters, the local municipality would not allow the whole of the Altabix site to be developed, nor would they contribute to the purchase of the land for new stadium. A government grant failed to materialise and the president’s plan to part-finance the stadium by selling parking spaces raised little in the way of hard cash.

Manuel Martinez Valero was made of stern stuff however. Having purchased land to the east of the town for 29 million pesetas and commissioned architect Juan Boix Matarredona, he commenced building in the autumn of 1974, even though planning permission had not been granted. This risked a heavy fine, but he knew that the city was continuing to grow and that this new stadium would have 300,000 potential customers on its doorstep before the end of the decade. He also boldly forecast that the stadium would host a World Cup, foresight indeed.

So with building underway, and the club back in the top flight following a brief drop into La Segunda, thoughts turned to the naming of the new stadium. “Nou Altabix” was a front-runner and “La Palmeral” or The Palms (You can’t go 20 yards with bumping into one in ) was also favoured. In total 17 names were put forward and the local newspaper ran a ballot, which resulted in the rather anodyne “Nou Estadio” coming out on top. The stadium was only named after the erstwhile president posthumously in 1988. ’s Nou Estadio opened on the 8 September 1976 with the president’s wife kicking off a friendly match against the Mexican national team. You can watch some rather grainy footage of the inauguration here. On opening, the stadium featured two double-decked stands on each side, but the upper tiers behind each goal were unfinished. It held 28,000 and was certainly more spacious than Altabix, but it could also be argued that it had arrived at least 5-10 years too late. Elche CF's peak had occurred in the mid to late sixties and the impressive stadium was not being matched by form on the pitch.
The first season in their new home saw a mid-table finish of eleventh, but the 1977-78 season saw the club finish 17th and be relegated to La Segunda. In fact, since moving the club has spent only 4 of the last 37 seasons in La Primera, and more worryingly, seven in Segunda B. After 14 consecutive seasons in La Segunda, Elche finally secured their first promotion to La Primera since the late 1980’s, and only their second Segunda title, in May 2013. The stadium attracted a healthy average attendance of 15,000 during the promotion season and witnessed a couple of sell-out fixtures as promotion beckoned. It may have taken a quarter of a century, but La Primera will be all the better for the return of Elche CF & the Estadio Manuel Martinez Valero.

The stadium has also seen its fair share of international football, starting with the 1982 World Cup. In preparation for the event, the Nou Estadio underwent a face-lift, just 3 years after it opened. The government money finally arrived, and whilst some questioned the wisdom in extending an already spacious stadium, the upgrade saw the  upper tiers complete which took the overall capacity  to 53,000. staged three matches featuring , and , but the overall attendance was poor. However, some of those who did attend witnessed history in the making, when the rampant Magyars trounced 10-1. La Seleción matches have in the main, attracted a full house, and their 5 visits to have all resulted in home wins. Here is a video of the interior of the stadium. The stadium also had the honour of staging the final of Copa del Rey in June 2003, when RCD Mallorca beat Recreativo Huelva 3-0.

The Estadio Manuel Martinez Valero is one of those stadiums that have won me over. Aesthetically, it is just a big, rather featureless bowl that would not look out of place in the top division of any European or South American league. The fact that it has seen very little top flight football, sort of adds to its appeal, as does the story of Martinez Valero's determination to get it built in the first place. It is now decked out with bands of green and white seats, which has reduced the capacity to 38,750. Simon Inglis in his book The Football Grounds of Europe, felt that a smaller stadium would have suited the club and the city better, saying that it was a case of the shoemaker getting too big for his boots! However, doing it the easy way just wasn’t Manuel Martinez Valero’s style and the story of Elche CF is all the better for it. 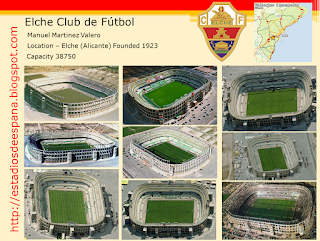 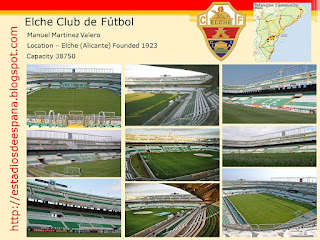