I have, or should say had a soft spot for CF Extremadura. They hailed from Almendralejo, a small town of 33,500 inhabitants around 25 miles south east of of the regional capital . Although it was not the first team from Extremadura to reach the Primera, they did so in the mid 1990's just when I started to show an unhealthy interest in Spanish stadiums. CF Extremadura was from the back of beyond, had never previously got close to the top division and was now living the dream. It didn't last long, and despite a quick return to the Primera for one season under the guidance of Rafa Benitez, there followed a slow and financially crippling death. They finally succumbed in the summer of 2010.
Extremadura was originally founded in 1924, but reformed in 1950. The move to a new ground in 1951 paid immediate dividends as the club won promotion to the Tercera in 1952. Two seasons later, it was promoted to La Segunda, scoring 110 goals in the process. There followed a seven year stay in La Segunda with a highest finish of fifth in 1958-59. They returned to the Tercera in 1961 but by the start of the 1970's, the pride of Almendralejo with kicking a ball around in the Regional Preferente. The 1980's saw a gradual improvement and in 1989-90, the Tercera title was won and with it, promotion to Segunda B. Four years in the third tier culminated with the league title in 1993-94 and then victory in the play-offs in a group that featured AEC Manlleu, CD Numancia & UP Langreo. 33 years after their last appearance, CF Extremadura returned to La Segunda, and after a steady first season, set about an assault on promotion. Early to mid-season form in the 1995-96 season had been impressive, but a run of poor results in February, March & April saw Extremadura drop out of the automatic promotion places. Three wins in the final four fixtures of the regular season saw the club secure fifth spot and qualify for the promotion/relegation play-offs. Here they met Albacete Balompié and two 1-0 victories in the tie earned Extremadura promotion to the top flight.
Extremadura CF endured a dreadful start to life in La Primera, winning just one of their first 19 fixtures. The second half of the season saw a remarkable turnaround, but with salvation within their grasp, the club lost the final fixture of the season away at Deportivo La Coruna and fell back to La Segunda. Back in the second division, Extremadura appointed Rafa Benitez, who had endured a chequered start to his managerial career at Real Valladolid & Osasuna. It proved to be an inspired choice, as under Benitez, Extremadura easily won promotion back to La Primera, finishing runners-up to Deportivo Alavés in June 1998. Back in the big time, Extremadura got off to another horrid start, but as the season progressed, Benitez's team proved very difficult to beat. Unfortunately, despite playing some decent football, the club could not break away from the relegation zone, and ultimately finished 17th and entered the relegation/promotion play-offs. What had been their route into the first division three years earlier, proved to be their route out, as they lost 4-0 on aggregate to Rayo Vallecano. Benitez left in the summer and Extremadura started the slow and painful descent into bankruptcy and extinction.
After eight particularly unconvincing seasons in the second and third tiers, Extremadura was demoted to the Extremadura Regional Preferente in 2007. It limped on for another painful three seasons, but in July 2010 following relegation to effectively the sixth tier of Spanish football, the club's main shareholder, the Ayuntamiento de Almendralejo wound the club up. Extremadura UD now play at Francisco de la Hera, a team formed back in 2007 when the debts of the former club became too grave and the thought of playing at a low regional level became unpalatable. The new club has acquitted  itself rather well, with high finishes in the Tercera and a season long stay in the Segunda B in 2010-11.
The Estadio Francisco de la Hera is not the first football ground in the town, that was the Campo de Santa Aurora which was on Camino Alange. This was used from 1928 to 1935 when they moved the short distance to Campo Santa Elvira. In 1950, the idea of building a municipal stadium was formed. They moved to a plot of land adjacent to the proposed stadium and for just over one season played at the site called Los Cañizos. On 12 October 1951, CF Extremadura played Sevilla FC in the inaugural match at the new Estadio Francisco de la Hera. The stadium remained relatively unchanged until 1996, when it was rebuilt side by side and a new stadium took shape on the same site.
The Estadio Francisco de la Hera is essentially a small town stadium that got itself a 60 minute makeover. Tucked away to the west of the town, the streets around the stadium hug the stands, particularly the two covered sides. The main stand tapers away towards the east end, so much so that the back of the upper rows and press box overhangs the street below. As with the Estadio Romano in , 20 miles to the north, the majority of the seating is behind both goals. The stadium has a seated capacity of 11,580, which was filled during the late 1990's, but attracted just over four figure crowds when UD Extremadura reached Segunda B in 2010-11. ﻿You can see some great shots from inside the stadium at Euro.stades.ch. 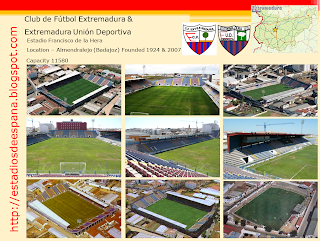