"There are stadiums great by reputation and association which, when first encountered, disappoint. The Nou Camp is not among them". So said Simon Inglis, the doyen of all things “stadium”. I must admit that I was, from a distance, a little underwhelmed by the . Then I paid a visit and I got it loud and clear. In the couple of hours I spent wandering around the stadium, the museum and the whole complex, I started to comprehend the size, the history, the symbolism and above all the fact that it is "Més que un club".
Back in the early fifties when the was first conceived, there was something of a "Stadium War" being conducted by the big clubs in . First off the mark was Real Madrid with their new stadium at Chamartin (It was opened in 1947, but was extended in 1953). Portuguese giants Benfica opened their Estadio Da Luz in 1954 and supporting acts were provided in the form of Sevilla's Estadio Sanchez Pizjuan and Sporting Lisbon's Estadio Jose Alvalade. Barça, even with their souped-up version of Les Corts and its 60,000 capacity, were wary of being left behind, and very nearly over committed to the building of the new stadium, which in part, led to the barren years on the pitch during much of the 1960's. The first stone was laid on 28 March 1954 and the proposed 66 million peseta project was to be financed entirely by club socios. Designed by local architects J. Soteras Mauri & F. Mitjans Miro, it would feature two huge tiers and a modern cantilevered roof over the west side.
The final years at Les Corts were very productive and saw the club win the league on two occasions (1952 & 53) and the cup on four occasions, including the 1957 final win against Espanyol at Montjuic. Then on 24 September 1957, the stadium was inaugurated with a match against a select Warsaw XI. 12 days later, the Camp Nou hosted its first official league match, when Barça put Real Jaén to the sword, winning by six goals to one. The new stadium, with its 90,000 capacity had taken 3 and a half years to build and finally cost 288 million pesetas, an almost ruinous 425% over budget. Initially, the teams form matched their impressive surroundings, with league titles in 1959 & 1960 and Copa del Rey victories in 1959 and 1963, but with an ageing side and talisman László Kubala switching to Espanyol, the remainder of the sixties and early seventies were barren years on and off the pitch.
Club finances were not helped by the protracted saga that surrounded the sale of Les Corts, and when it was finally sold in 1967, all of the 226 million pesetas raised were used to pay off the club debt. With the club's finances back under control, the club set about rebuilding the team and developing the next stage of the sports complex. 1971 saw two significant changes. First of all the Palau Blaugrana, an indoor sports hall, and an Ice Rink were added in 1971. This would be home to the club's basketball, handball, volleyball, roller hockey & ice hockey teams, and generate valuable additional revenue as a concert arena. On the pitch, the great Dutch coach Rinus Michels was employed, and thanks to his persuasive powers, Johan Cryuff chose Barça ahead of Real Madrid.  The league title returned to the Camp Nou at the end of the 1973-74 season and the Copa del Rey followed three years later. As for the stadium, well with the exception of two electronic scoreboards, it remained unaltered until the lead  up to 1982 World Cup.

The Camp Nou was chosen to stage the opening match at Mundial '82, along with three second round matches and a semi-final. So in 1980 a major reconstruction project began which would result in the capacity increasing to 120,000. At a cost of 1,298 million pesetas, an additional third tier was added to the three uncovered sides, along with new scoreboards and floodlights. A plaque in the upper foyer commemorates the opening of the remodelled Camp Nou, which saw Belgium defeat then world champions Argentina 1-0. The crowd of 95,000 was the highest of any of the matches staged at the Camp Nou, in what was generally a poorly attended World Cup. Not that Barça was complaining, they had increased the size of the stadium and for once it didn't dent the club coffers. To round things off, 250 metres to the west of the stadium the club built another, albeit smaller stadium, the Mini Estadi.
The Camp Nou was now Europe's largest and most prestigious sporting venue and during the eighties it saw its fair share of sporting and non-sporting activity. Under the tutelage Terry Venables, the league title was captured in 1984-85 and the Copa del Rey in 1986. Pope John Paul II paid a visit in November 1982 and became a member of the club, and practically every 1980's pop icon seemed to play the stadium. Then, with Barcelona winning the right to stage the 1992 Olympiad, the Camp Nou was chosen to host the final of the football tournament. The 1992 Olympic soccer tournament also saw matches staged at Espanyol's Sarrià stadium, Sabadell's Nova Creu Alta, Real Zaragoza's La Romareda, Valencia's Mestella, but it was Spain's memorable last minute victory over Poland in the final that capped a hugely successful Olympiad for Barcelona.

In 1993 Barça started the process of turning the Camp Nou into an all-seater arena, but to achieve this and ensure that the lowest tier of seating had decent sight lines, the pitch was lowered by 8ft. This also involved removing the popular standing areas from behind the goals, much to the chagrin of the notorious Boixos Nois supporters club. The addition of seats to the lower tiers saw the capacity drop to 115,000, and this dropped a further 15,000 when the upper tier was seated in 1995. The lighting and sound systems were upgraded during the 1998-99 season and the stadium was awarded UEFA 5-star status prior to hosting the 1999 Champions League Final, which turned out to be a rather eventful match. Although It seems so much better with German commentary.
When you pay a visit to the Camp Nou, try to show some restraint and look around the whole complex first. If you arrive via the subway to the north, you will get a better feel for the size and layout of the empire. With the access ramps to the main stadium in front of you, to the right is the Palau Blaugrana, which has a capacity of 6,400. Further right and connected to the indoor arena by another walkway is the Mini Estadi. It is looking a little tired now, but still incredible to think that the B team, yes the B team, has its own 16,500 capacity stadium. Dotted around the 16 hectare complex are training pitches and outdoor tennis and handball courts. Wander back past the stadium, I said you needed to show restraint, past the cemetery of Les Corts and amid all this urban architecture you will find a farmhouse. This is La Masia, built in 1702 and for 20 years the club offices, but since 1979 it has been the headquarters of the club's youth academy. As if the youngsters didn't have enough to inspire them, the Camp Nou is but a goal-kick away.
Structurally, very little has changed at the Camp Nou in the past 20 years. There is the perennial changing of the colour configuration of the seats, but when you have over 99,000 of them, it must seem to be a never ending job. There is of course talk of rebuilding or starting afresh elsewhere. In 2007 for instance, British architect Sir Norman Foster’s design won a competition to renovate the Camp Nou. At an estimated cost of 250 million euros, the plan included the addition of 7,000 seats for a maximum capacity of 106,000. To finance this, the board approved the sale of the land on which the Mini Estadi stood, but in 2009 just before work was due to begin, the project was halted thanks to the world financial crisis and subsequent fall in real estate prices.
As Barça started an era of unparalleled success on the pitch, talk of redeveloping the Camp Nou was put on the back-burner. Everybody knew that this iconic structure was outdated and lacked little of the commercial and media infrastructure that so many of its competitors had. But whilst the team remained all-conquering, little else seemed to matter. Then, just as Barça’s infallibility was being questioned, and with news emerging of Real Madrid’s imminent redevelopment of the Santiago Bernabéu, the club’s board acted.  In January 2014 the club announced a €600m redevelopment of the stadium and surrounding area. Beginning in the summer of 2017, the rebuild will tackle the principle problems that currently exist at the Camp Nou; namely sight-lines, cover and corporate revenue. The project will also see the building of a new indoor arena, replacing the ageing Palau Blaugrana, which will stand on land currently occupied by the Mini Estadi. Sadly, this means that the B Team will move their fixtures to a new 6,000 seat stadium at the Ciutat Esportiva Joan Gamper, Barça's training facility at Sant Joan Despí.

The first phase of the redevelopment will see the realignment of the lower tier, addressing the shallow rake of the seats which has proved problematic since the pitch was lowered in 1993. A new ring of corporate boxes will be built, which will add 3,500 VIP seats along with restaurants and improved media facilities. Between 2018 and 2020, the North & South Grada’s will be extended, rounding-off the ends that currently taper down towards the main stand. The summer of 2020 will see the old roof removed and another tier added to complete the bowl. A ring of roof piles will be incorporated within a new exterior, and finally in 2021, a 3-ringed cantilevered roof will be constructed to cover all four sides of the stadium. The new capacity will stand at 105,053 and Barça estimate that revenue will increase by €29m per annum. The stadium will still be known as the Camp Nou, but the club has not ruled out the selling of naming rights. Given that they say the cost of the rebuild will be repaid within 8 years, it seems certain that the stadium will adopt some corporate suffix.
This is all very exciting, but what of the stadium today? Well it is a truly uplifting experience, even if like me, you visit it in the pouring rain. The Museum, which opened in 1984, is the city's most popular and it is beautifully choreographed. Sure, some of the stairwells are beginning to show their age, but stepping out into the arena for the first time is breath-taking. I've talked about the problems with sight lines on earlier posts, but even on the top tier, you are still remarkably close to the pitch. On the way out of the museum, you pass a video wall, where hundreds of the club's socios tell you what Barça means to them. If you ever wondered why they say "Més que un club", then you can be in no doubt after watching their video tributes. The Camp Nou really is one of the wonders of the footballing world. 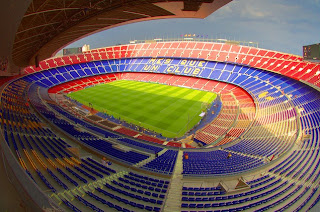 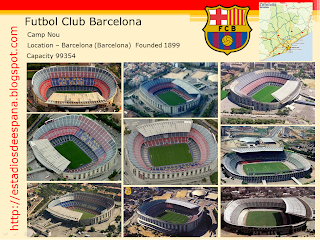 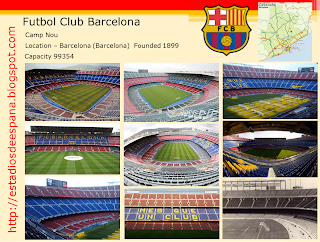