The history of the reserve teams for FC Barcelona is a tangled affair, with stories of mergers, fans alliances and teams going their separate ways, before the current structure was established in 1970 when FC Barcelona B, or Barcelona Atlético as it was then known, was formed.
The first team to be affiliated as the club's reserve side was Sección Deportiva La España Industrial. Founded in 1923, it was  the factory team of a textile manufacturer, owned by Josep Antoni de Albert, who became President of FC Barcelona in 1943. In 1946 the team became fully affiliated to Barca and started to play at Les Corts. In 1952, the club reached La Segunda and four years later won promotion to La Primera. In order to take up their position in the top flight, the club broke away from FC Barcelona and took on the name CD Condal. They continued to play at Les Corts, but their stay in La Primera lasted just the single season and they finished in bottom place. Their matches against FC Barcelona were both played at Les Corts. The first match on 12 January 1957, with Condal as home team, ending in a 1-1 draw. The return match at er... Les Corts took place on 7 April 1957 and was a one sided affair with Barcelona winning 5-0.
Back in La Segunda, CD Condal played on until 1961, when beset with financial problems they resigned and dropped to the regionalised Tercera. They regained their place in La Segunda in 1965, and played on at Les Corts until it closed in February 1966. From here they enjoyed a spell at the Camp Nou, falling back into the Tercera at the end of the 1966-67 season. In 1970 they merged with Atlético Cataluña CF, a team set up by Barça's fans in 1965, to form the current reserve side. Atlético Cataluña had themselves merged with another factory team, CD Fabra y Coats, and it was their ground sandwiched between the Passeig de Fabra i Puig and Carrer de Dublin, that the newly monikered Barcelona Atlético used from 1970 to 1982.
On 23 September 1982 Barcelona Atlético played the first team in the inaugural match at the Mini Estadi. Designed by local architect Josep Casals it had seating for 15,276 over two tiers, and a cantilevered roof over the west side. The new stadium cost 270m pesetas and made a stunning statement about the size of Barça. Here was a club with 110,000 members, sports sections that are among the best in Europe and their reserve team play in a purpose built, all-seater stadium. This compact design was copied elsewhere in Spain with CD Castellon opening the Nou Castalia in 1987 and FC Cartagena opening the Estadio Cartagonova a year later.
In its heyday the stadium has seen full houses, such as in the Copa del Rey in 1984 when Barca B drew 0-0 with Real Madrid and Andorra's international matches against Holland & The Republic of Ireland. Queen, Elton John & David Bowie have all packed out the Mini Estadi, although the ill-fated attempt to bring American Football to Europe, failed to tempt the Catalan public to the Mini Estadi and the Barcelona Dragons folded in 2003.﻿ However, its most important role over the past three decades has been to act as the stage where the club's most promising talent take their first steps in senior football.
Apart from a season long drop into the Catalan Regional League in 1972-73, the team made quick progress, reaching La Segunda in 1974-75. It then spent 17 of the next 25 seasons in La Segunda, achieving a highest place finish of sixth on three separate occasions. They dropped to Segunda B in 1999, and took another eleven seasons to regain their place back in the second tier. They retuned to La Segunda in 2010 when they adopted the current title of FC Barcelona B, finishing the 2010-11 season in third place. The Spanish League obviously outlaws any reserve team playing higher than La Segunda and with no chance of a Condal-style breakaway, this is as high as the team can go. The exploits of the youngsters have attracted decent crowds to the Mini Estadi, with an average gates as high as 6,000 in recent seasons.
Whilst most clubs would bite your hand off for such a stadium, I have to say the Mini Estadi is looking rather tired. Quite a few seats are either broken or working lose from their moorings, and all of them have faded in the Catalan sun. Talk of selling the ground to aid funding of the redevelopment of the Camp Nou was first raised in 2007. Whilst there was a stay of execution back then, the axe will fall in 2017, when as part of Barça's plans to expand the Camp Nou, the site of the Mini Estadi will be leveled for a new Palau Blaugrana. This will result in Barcelona following the lead of so many other La Liga clubs, and base their B team at the club's out-of-town sports city. A new 6,000 seat stadium is due to open in the summer of 2017 at the Ciutat Esportiva Joan Gamper 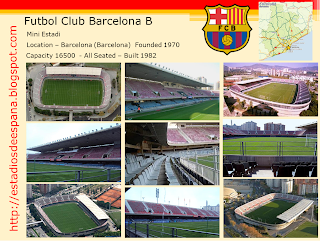