After coming so close to promotion to La Primera at the end of the 1986-87 season and with a new stadium on the horizon, the fans of Cartagena FC could have been forgiven for thinking that their club was on the cusp of the big time. Unfortunately for them, things were about to take a turn for the worse. Forced to leave their old El Almarjal stadium before their new stadium was complete, the team played 12 miles up the road  at the municipal stadium in Torre Pacheco. This arrangement lasted from October to January, before the new Estadio Cartagonova opened on its doors for the first time on 7 February 1988 with a scoreless draw against Real Burgos. The new stadium was an almost an exact copy of Barcelona's Mini Estadi and took its name from the  Roman name for the ancient city of Cartagena.
Clearly the fact that the club had three home stadiums in one season didn't help matters, but only one win on their travels also showed that the problems lay a lot deeper than a bit of stadium disruption. By the end of the 87-88 season, Cartagena FC had finished bottom of La Segunda, seven points from safety. The club set about the task of returning the the second division and over the next six season came close on two occasions, losing on the final day of the play-off group in 1991 & 92. These efforts saw the club accrue large debts and when they failed to pay their players at the end of the 94-95 season, the club was relegated to the Tercera. Disenchanted with the way in which the club was run, local businessman Florentino Manzano set up Cartagonova FC and within a season, the fledgling club found itself in the Tercera along with Cartagena FC. Alas, there was to be no local derby as Cartagena FC folded five games into the season, leaving Cartagonova to take over the mantle of the city's senior club and by the summer of 1998, the new club had won a place in Segunda B.
Cartagonova FC had shared the municipal stadium since forming in 1995 and eight years on from inauguration, the stadium was clearly head and shoulders above anything else in the region. The stadium was designed by Catalan architects Josep Casals and Ramón Domènech who, unsurprisingly were responsible for Barcelona's Mini Estadi. It consists of two overlapping tiers, the upper seated, whilst the lower had seats on the sides, but was terraced behind the goals. This gave the ground a capacity of 20,000 on opening, but this was later reduced to 15,105 when it was converted to an all seat arena in 2000. Over the west side hangs a sleek cantilevered roof, which stands slightly higher on its mountings than the Mini Estadi. On 26 January 2000 La Seleccion beat Poland 3-0 in a friendly international, the first match the that the senior national side played in the region of Murcia.
The club spent the next eleven seasons in Segunda B, reaching the play-offs on three occasions. In 2003, Cartagonova FC changed its name to FC Cartagena. It also changed its badge so that it closely matched that of the previous senior clubs from the city. On winning its second Segunda B title in 2008-09, FC Cartagena disposed of Alcoyano 3-2 on aggregate to win promotion to La Segunda for the first time, 21 years after its predecessor. That first season in the second tier saw the club finish fifth, remaining promotion candidates until the final few weeks of the season. The 2010-11 saw a more restrained, but still creditable thirteenth place finish. The 2011-12 season was a struggle from start to finish with Cartagena looking destined to return to Segunda B. To add to the club's woes, the home match on 7 April 2012 against Celta Vigo, was abandoned on the hour mark when an assistant referee was struck by a coin thrown from the crowd. The remaining 31 minutes was played a month later behind closed doors.
During the summer of 2010, the Estadio Cartagonova underwent an 800,000 euro refit. Improvements were made to the floodlights, pitch drainage, removal of fences and media facilities, all of which led to a small reduction in the capacity. For the start of the 2010-11 season, the stadium had all seated capacity of 14,532. On the basis of the club's impressive first season in La Segunda, the municipality hatched plans regarding the extension of the stadium. There are two potential plans, the first of which would see the building of an additional tier of seven thousand seats on the three open sides of the ground. The second, and cheaper alternative would see the pitch lowered a few metres and an additional six rows of seats being installed around all four sides of the ground. Similar work has been carried out at Valencia, Villarreal and tellingly, Castellon who like Barca B, has an almost identical stadium to FC Cartagena.  We will have to see which, if any project takes shape, as the club returned to Segunda B for the 2012-13 season. 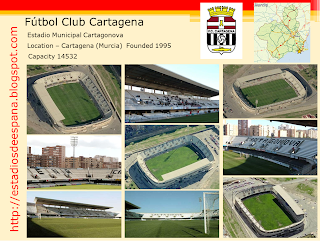