The old Estadio El Almarjal was the focal point for football in Cartagena for over 60 years. An old school stadium that changed little during its lifetime, it was however not the city's first stadium. Formed in 1919, Cartagena FC played their first matches at Campo de Alfonso XIII, which was popularly known as the Campo de la Plaza de España. It had been home to Sporting Club Cartagena, the senior club in the city until they went to the wall in 1918. Cartagena FC carried on playing at the Campo de la Plaza de España until the lease ran out in 1925.
With the help of the local council 30,000m² of land next to the railway station was handed over for the development of a stadium.  Work began in June 1925 and three months later on 19 September, El Almarjal opened with a friendly match against Valencia CF, which resulted in a 1-4 victory for the visitors. On opening, the stadium had a capacity of 12,000 and the east and west sides had 17 and 13 steps of terracing respectively. The north and south Fondos were made up of 7 steps of terracing. Instead of placing the terracing on banks of soil, the stands had been built with recesses and this allowed for the dressing rooms, directors lounge, gymnasium and other club facilities to be added. At a cost of 220,000 pesetas, the club and the town of Cartagena had a truly modern stadium and along with Real Murcia's La Condomina, one of the best stadiums in the southern Spain.

Cartagena FC played in the Tercera from 1929 to 1934, winning their regional league on two occasions, but never breaking through to La Segunda. By the time of the outbreak of the Civil War, they had dropped to the regional league, but like many clubs from larger towns & cities, Cartagena FC benefited from the restructuring of the league in 1939 and as a result, were granted a place in La Segunda. The club finished fifth in the 1939-40 and whilst all around them were relegated to the Tercera, Cartagena FC earned a stay of eviction. Was this due to the fact that Cartagena was an important city in the government's eyes as it was home to the Mediterranean fleet? The club lasted two more seasons at this level before descending to the regional and Tercera divisions for the next six seasons. Cartagena FC was back in La Segunda in 1949, but in truth the club was overstretched and after three seasons of struggle, the club was wound up on 10 August 1952 due to its serious debts and demotion to the Tercera.
﻿Unión Deportiva Cartagenera took over the mantle of the city's senior club and whilst they did reasonably well during the 1950's in the Tercera, it wasn't until a name change to Club Deportivo Cartagena in 1961 that promotion to La Segunda was won. Two seasons of toil ended in June 1963 and the club returned to the Tercera. A further change of name to Cartagena Fútbol Club in 1974 bought nothing in the way of reward, in fact the club dropped to the regional leagues in the mid 1970's. The club won the Tercera in 1979-80 and this started a rise in form that culminated with a eighth place finish in La Segunda 1984-85.
El Almarjal had changed very little in the past 60 years and with the area prone to flooding the municipality decided to build a new stadium. The last match was played at El Almarjal on 27 September 1987, with Cartagena FC beating CD Castellón by four goals to nil. With delays in the development of the Estadio Cartagonova, Cartagena FC played several home matches at the municipal stadium in Torre Pacheco, a dozen miles to the north of the city. Finally on 7 February 1988, Cartagena FC held Real Burgos to a goalless draw at the new stadium. Today, the site of the old El Almarjal stadium is a Carrefour supermarket. 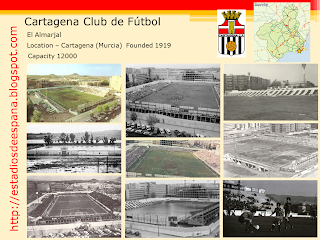