The arrival of Nationalist Government would have dire consequences for the former separatist areas of Catalunya and the Basque Region. However contrary to perceived perception, the 1940's was a very successful decade for Barcelona. Whilst Real Madrid struggled in the seasons following the Civil War, Barça and Athletic Bilbao racked up a series of wins in the league and cup. Buoyed by the improving finances the club set about the further and most spectacular development of Les Corts. In 1944, the existing terracing was extended raising the capacity to 60,000, but the most impressive work took place on the west side. Designed by Eduardo Torroja, an incredibly advanced, deep cantilevered roof was erected behind the existing cover. Gimnástic Tarragona purchased and dismantled the old stand and on 2 June 1945, Barça played Nástic in a friendly to mark the opening of the expanded stadium.

The new roof was among the most advanced in Europe and used a mix of reinforced concrete and steel. The roof undulated and had a span from front to back of 27 metres.The curved underside of the cover was ribbed with metal cladding, and hung low over the seating deck like the tail of a giant alligator. Les Corts was the largest and most spectacular stadium in Spain throughout the forties, and it would witness the emergence of the next great Barça team in the mid 1940's and the arrival of Hungarian great Ladislau Kubala in 1950. League titles followed in 1952 & 1953, but by the time floodlights were erected in 1954, the club had already decided that the stadium could not cater for their ever expanding support. No doubt prompted by Real Madrid's development of Chamartin, (soon to be called Santiago Bernabéu), the club purchased a large expanse of public gardens and allotments in the west of the city, and in March 1954, the first stone was laid at the Camp Nou.

The move away from Les Corts was necessary if the club was going to compete with the great Real Madrid side of the 1950's, but it was dependent of selling Les Corts for housing. This proved to be a problem for several years as the municipality was keen to keep some green space within an ever expanding city. Eventually, the club turned to Franco's Council of Ministers who overturned the council's decision and sanctioned the sell of the land for housing. An example, and there are a few, where Barça benefited from Franco's regime.
All this time, whilst Barça were running up a crippling debt following the construction of the Camp Nou, things were not exactly great on the pitch and many questioned the decision to build such a large stadium. Finally, on 2 February 1966 demolition started on Les Corts and three months later, the site was sold for 226 million pesetas. The entire sum received from the sale was used to pay off the club's debts. Here is some great footage of the stadium over its forty-odd year history.

The first team played their last league match at Les Corts in 21 April 1957. Kubala scored the last goal in 1-1 draw with Sevilla that saw the Andalucians qualify for Europe at Barça's expense. CD Condal, who for part of its history was affiliated to FC Barcelona, carried on using the stadium until 1965 before moving to the Camp Nou. In 1970, SD Condal merged with  with Atlético Cataluña CF to form Barcelona Atlético or Barcelona B as they are now known. 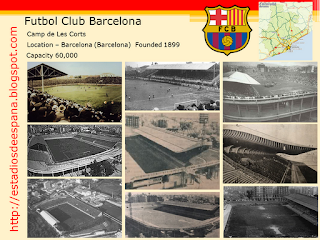