Prior to the advent of day-time television and 2-4-1 offers in the union bar, students could be a resourceful bunch. Take for example the students who formed RCD Espanyol way back in 1900, as a sports club for the Spanish middle classes in an increasingly pro-Catalan . As with many clubs those formative years for Espanyol were at times difficult and not helped by their almost nomadic existence. Between 1900 and 1909 the club underwent four name changes and played at five different grounds. The original club even went into a sort of hibernation in 1906 when X Sporting Club (no, they really were called X!) took on the footballing duties and made a rather good fist of it, winning the Campionat de Catalunya in successive seasons from 1905-08. In 1909 the club was relaunched as Club Deportivo Español and a year later adopted their present colours of blue and white stripes.

In 1911, the club moved to Campo de la Calle Muntaner which had been vacated by arch rivals FC Barcelona the previous season and at the end of the season, they celebrated another win in Campionat de Catalunya. Further titles followed in 1915 & 1918, and the old stadium was even chosen to stage the final of the cup in 1917. Madrid FC & Arenas lined up on 13 May 1917 and again two days later for a replay. However, the truth of the matter was that although Campo de la Calle Muntaner provided them with a stable home, it was very basic and was not a patch on the new stadium that FC Barcelona opened in 1922 in the Les Corts district.
You can already see a pattern developing, one that shows Espanyol eternally a step behind their neighbours. However, help was at hand in the form of the La Riva Family, wealthy textile industrialists, who bought Espanyol some land on the Carre de Sarrià, deliberately close to Barca's Les Corts stadium. The ground was initially called Can Rabia, or White House, after an old villa that stood behind the southern goal. Construction began in December 1922 under the supervision of architect Matías Colmenares. The initial plans for the stadium to hold 40,000 spectators had to be downscaled after the construction company went bust. So with a revised capacity of 10,000, the ground opened on 18 February 1923 with a 4-1 victory over UE Sants. It was a basic affair of banked terracing or bleachers and in 1926 the first stand was erected. Two years later and Sarria was the location of the first ever goal in the new national league, when "Pitus" Prats scored for Espanyol in a 3-2 over Real Union.
In 1929, Espanyol won their first Copa del Rey, defeating Real Madrid at 's Mestalla stadium, but soon afterwards sold their talismanic goalkeeper, Ricardo Zamora, to their cup final opponents for a then record fee of 100,000 pesetas. An enforced name change to Club Deportivo Español followed in 1931, after the forming of the outlawed the use of royal insignia, but this was reinstated after the civil war. In 1940 the club won its second Copa del Rey once again defeating Real Madrid, this time 3-0.
I've highlighted in earlier posts how Generalissimo Franco had some "previous" when it came to interfering with footballing matters. In the mid 1940's he decreed that all club presidents must be nominated by his cronies in  the La Riva family. They demanded the return of their land and a protracted dispute ensued, only resolved in 1951 when the club bought the ground for 5 million pesetas. This led to a building spree, with the White House making way for a new south terrace in 1952 and an anfiteatro or raised terrace being added to the west side in 1956. This work was conducted by J. Soteras Mauri, the co-architect of the .
The 1950's and 60's saw slim pickings for Espanyol, who were relegated to La Segunda for the first time at the end of the 1962-63 season. They returned to La Primera a season later, but were back in the second tier again in 1969-70. In all, the club have dropped to the second division on four occasions, but have bounced back every time within a year.
The east side was developed in 1974 when an all-seated covered stand was erected, and then in the lead up to the 1982 World Cup, 413 million pesetas were splashed out on redeveloping the ground and its infrastructure. This included seating the paddock area in front of the east  stand, new corner terraces, improved media facilities and new floodlights. This raised the capacity to 44,000. Sarria hosted 3 second round matches at España  82, including possibly the greatest game ever played at the finals, 's 3-2 victory over .

La Selección rarely plays in , certainly not that often since Franco popped his clogs, but they were welcomed to Sarrià by this pro-Spanish club on 3 occasions. However, it is a reflection of Sarriá's place in the pecking order, that Montjuic, Les Corts & the Camp Nou all staged internationals prior to its first match in February 1974. On that occasion, West Germany were the visitors and were sent packing with a 1-0 defeat. Denmark paid a visit in October 1975 and Spain was victorious again, this time by two goals to nil. The national team's last appearance at the Estadi de Sarriá was in November 1980, when they lost 1-2 to Poland. Sarrià saw its last international action when it hosted five matches during the 1992 Olympics.
Whilst the Olympics thrust Sarrià into the spotlight once again, it also cast a shadow over the ground thanks to the redevelopment of Estadio Montjuic. Not wanting an 8500 million peseta white-elephant overlooking the city, the municipality and the Catalan Parliament put pressure on the club to up-sticks and move into the Olympic Arena. Initially the club and in particular its 18,000 socios resisted, but as the clubs debts rose, selling Sarrià to developers became the only feasible option and on 21 June 1997 it hosted its final match, with Espanyol beating Valencia 3-2. Later that year on the 20 September, the stadium was raised to the ground. Click here if you a not too nostalgic, or if you just like watching stuff get blown-up. Three altogether more sympathetic looks at this great stadium can be found here, here & where did I put it... oh yeah, here.
Watching the videos of Sarrià shows you of what an atmospheric, intense and at times, hostile arena it could be. Espanyol's fans would not experience anything like that for the next 12 years as they headed off to the folly on the hill. 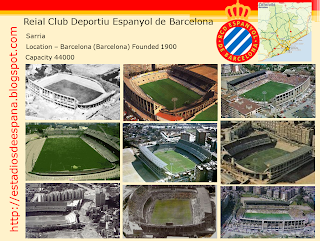 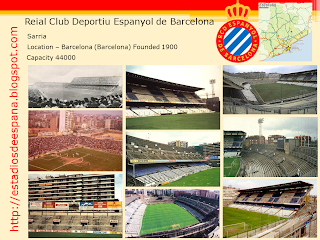