Real Unión Club de Irún is one of the founder members of the Spanish League. Unfortunately for them, their golden era came in the decades immediately prior to the set up of the league and included four victories in the Copa del Rey. The club was formed in 1915 following the merger of Irún Sporting Club and Racing Club de Irún. The former was founded in 1902 as Irún Foot-Ball Club, changing its name in 1907.

Real Unión used Campo de Amute just to the north of town in the village of Hondarribia, not far from the current site of Irun's airport. The ground had opened on 2 January 1910 and was home to both Irún Sporting Club and Racing Club de Irún before the merger. It also hosted the 1915 Copa del Rey Final when Athletic Bilbao defeated Espanyol 5-0. Racing Club de Irún, formed in 1908, had already won the Copa del Rey in 1913 beating Athletic Bilbao 1–0 in a replay after the first match was drawn 2-2. Real Unión include this victory in their trophy haul. The club went on to win three further Copa del Rey's in nine years. The first came in 1918, when they defeated Real Madrid 2-0 in Madrid's own Estadio O'Donnell. Real Madrid were defeated again in a 1-0 victory at Atotxa in 1924, and in 1927 they beat Arenas Getxo 1-0 in Zaragoza's Estadio de Torrero.
In 1926 and at the peak of their powers, Real Unión moved to the other side of Irun and their current Stadium Gal. It was inaugurated 19 September with a match against Barcelona. There was a strong Anglo influence at the club in the early years, with England great Steve Bloomer, managing the club for several years in the 1920's. ﻿The original structure could have easily passed itself off as an English, that was until the local municipality installed a cycle track in 1950.﻿ The Anglo influence may be the reason why the title "stadium" is used rather than estadio or campo. That or a Basque refusal to use castellano. ﻿You can see from the aerial image below, that the pitch was originally 60 metres or so further south.
Real Unión's powers had begun to wane by the time the league started up. With their unquestionable pedigree, the club was a shoe-in for the first division, but finished ninth out of ten in the inaugural season of 1929. The was some improvement over the next couple of seasons with a sixth and seventh place finish, but Real Unión finished tenth and last in 1931-32 and was relegated from La Primera, never to return. Seven seasons either side of the Civil War followed in the second division, before the club dropped to the Tercera. It has made three fleeting visits back to La Segunda, each finishing in relegation after just one season.
By the mid-nineties, the Stadium Gal was in a sorry state. Major reconstruction took place in 1997, with the building of a modern cantilevered stand on the west side and an open bank of seats on the opposite east side (less than 400 metres from the French border). Two narrow terraces are found at the north and south ends, with the southern end having a narrow cover. A roof was added to the open bank in 2005.
The club has experienced a bit of a renaissance in recent seasons, first by dumping Real Madrid out of the Copa del Rey in November 2008. Later that season the club beat CE Sabadell an AD Alcorcon to secure promotion back to La Segunda for the first time in 44 years. Their adventure in La Segunda lasted just the one season with the club finishing 21st, some 5 points short of safety. Those clever people at euro.stades.ch have visted Stadium Gal and you can see their pictures here. 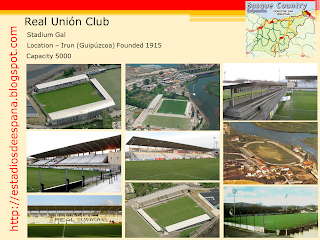