Love them or loathe them, there is one inescapable fact about the daily soap opera that is Real Madrid Club de Fútbol - It has a truly magnificent stadium. From its vantage point on ’s prestigious Castellana, the Estadio Santiago Bernabéu is almost certainly the world’s most recognisable sports arena. And over the years, as Real Madrid has grown into a footballing institution, so the stadium has grown to symbolise the club’s power and whisper it quietly, elitism.

Founded in 1902 as Madrid Foot-ball Club, The Bernabéu is the club’s sixth stadium, although the “estadios” used before 1912 were little more than roped-off fields. The first enclosed ground was the Campo de O’Donnell, which the club used for just over a decade before making the ill-advised move to a newly constructed velodrome in the eastern suburb of Ciudad Lineal. Away from the centre of town and the nucleus of Real Madrid’s support, the club stayed here for little over a year, before decamping to the district of Chamartin and a specially commissioned 15,000 capacity stadium. Chamartin remained the club's home for 22 years, although following its near destruction during the Civil War, was rebuilt and at its peak held 22,000. This was not big enough for former player, club secretary and now club president Santiago Bernabéu. In 1944, Bernabéu signed off the purchase of 5 hectares of land that was sandwiched between the existing stadium and the Castellana, or Avienda Generalisimo Franco as it was then known. On this site, at a staggering cost of 38 million pesetas, would be built the new Estadio Chamartin and Bernabeu himself broke the first ground in October 1944. You can read about the club's former homes here.
The new build was on the old stadium’s doorstep, so close in fact that the north east corner of the old Chamartin encroached onto the new stadium’s ground plan. Work continued on the other three sides and Real Madrid finished off the 1945-46 season, before finally closing the doors of the old Chamartin in May 1946. The new stadium took a further 18 months to complete and so Real Madrid took up residence at Atletico ’s Estadio Metropolitano. Finally, on 14 December 1947, Real entertained Belenenses of Portugal in the inaugural match at the Nuevo Estadio Chamartin. Designed by Luis Alemany Soler and Manuel Munoz Monasterio, the stadium had a capacity of 80,000 and featured three sides of open double-deck stands and a lower bank of uncovered terrace on the east side, where the old stadium had stood. In the centre of this terrace, at the rear, stood a neo-classical tower.

If Real Madrid was looking for an immediate on-field impact at their new stadium they were to be disappointed. At the end of the 47-48 season, the club finished eleventh, its lowest ever final placing. It is worth pointing out that up until the mid-fifties, the club had a relatively modest collection of silverware. Their two league titles had been won twenty years previous and seven of their nine victories in the Copa had come before the Civil War.  Much has been made of Real Madrid being Franco’s pet team and whilst Bernabéu was himself a Nationalist sympathiser, allegations of government intervention in the club’s results and finances are without foundation. In fact, Real Madrid won very little in the first 15 years of Franco’s reign and it could be argued, that in the end, it was Franco's government who benefited from Real Madrid's international kudos. Maybe Bernabéu sensed that the club was about to take off, for little more than five years after opening the stadium, the next stage of redevelopment began.

Work began on remodelling the east side in 1953. The shallow bank of terracing was removed and in its place grew an immense open stand, which featured a third tier or anfiteatro. This was flanked on either side by two rectangular towers, complete with turrets. The new stand was opened on 19 June 1954, two months after the first league title of the Santiago Bernabéu era was secured.  Whilst the new stand took the capacity of the stadium to 120,000, it wasn’t the dimensions of the stadium, but rather its understated grace and refined lines that set it apart. In recognition of Bernabéu’s unflinching dedication to the club, the stadium was renamed in his honour on 4 January 1955. As the new era of European club football got under way, floodlights were installed and unofficially used when Sport Recife of Brazil paid a visit on 18 May 1957. On 30 May 1957, the stadium staged its first European Cup Final against Fiorentina, which Real duly won. Then, with the exception of new lights and a couple of club crests being added to the towers in 1969, the stadium stayed the same. Real continued to dominate the domestic scene with 14 league titles between 1960-80, but the club was no longer the dominant force in . Santiago Bernabéu passed away in June 1978 by which time the stadium had been selected to host the 1982 World Cup Final.
However, the graceful stadium of the 1950’s now required major surgery and this was to come at a cost of 700 million pesetas, with Real footing three quarters of the bill. The re-fit included the installation of more seats which reduced the capacity to 90,000, the addition of a 150 metre long footbridge to a temporary media centre and re-facing & strengthening the façade of the ground, in order to support a new cantilevered roof that would cover three sides of the stadium. Stadium aficionado Simon Inglis likened the roof to a Tupperware lid, snapped tightly on to the stadium’s bowl and its streamlined curves certainly added a pleasing modern symmetry to the stadium. It was nonetheless a major piece of construction, accounting for half of the overall cost. Using lightweight fibre-mix cement and acres of fibreglass panels, it swept around to meet the open, but still majestic east side. High, behind each goal, the roof fascia appeared to morph, so that video screens, the first in any stadium, could be accommodated. The new remodelled Bernabéu saw its first official match when Real took on the in February 1982.
The next significant phase of redevelopment arrived in the early 90’s when a third tier was added to the north, south & west sides. The club was unable to excavate the pitch as seen at the Mestalla or , because right under the hollowed turf runs a metro tunnel. In some areas it is said to be a metre below the surface, so the only way was up. The work also saw the exterior of the stadium spruced up and in particular the main entrance on the east side.  Work commenced in February 1992 and saw the existing roof of ten years, removed piece by piece for safekeeping and huge pre-fabricated sections added to the stadiums new outer skin. To access this new level, four cylindrical entrance towers were erected in each corner of the stadium. As each section was complete, the existing roof struts & panels were repositioned, along with new sections in the corners. Due to the increased height, the pitch would be permanently shaded during the winter months, so under-soil heating was installed. Also, those fans on the lower tier of the west side required improved shelter, so a retractable roof was added. The work was concluded on 7 May 1994 at a cost of 5 billion pesetas and increased the capacity to 110,000. Four years later however, the Estadio Santiago Bernabéu became an all-seat arena with a greatly reduced capacity of 75,328.
The reign of Florentino Perez as president bought about further change. Whilst some have questioned has signings, Perez soon figured that the east side of the stadium, where the directors, dignitaries and press sat, was the only area of the stadium exposed to the elements. Smart cookie! So with a budget of 127 million euros, the club set about expanding and improving the east side. The biggest holes in the budget were punched by the building of a new gallery tier and roof, thus enclosing the stadium for the first time. Other improvements saw the dismantling of the two towers and new VIP boxes constructed in their place, new media facilities, bars, restaurants and overhead heaters to keep out the chill of the winter months. Following the completion in 2006, the stadium's capacity increased to 80,354. On 14 November 2007, a month before the stadium's sixtieth anniversary, UEFA announced that the stadium had achieved Elite status. Well, that was all worth it then! You can see the development of the stadium and the future plans on this fantastic video.

A visit to the stadium brings mixed emotions. Any football fan will be awe-struck by the simple fact that this is the home of the most successful club side in football history. Fans of architecture will undoubtedly be impressed by its complicated structure, its evolution and the fact that the integrity of the club and stadium has been maintained. Despite this however, any visit is a rather clinical experience. You are reminded at every turn, either directly or subliminally that this is a special, elite club. Real polarise opinion at home and abroad. One man’s elite aristocrat is another man’s arrogant poser. There is another view however. Sure from time to time, you shake your head in disbelief at the club’s antics, but it is a reasonable price to pay for the history and the remarkable monument that is the Estadio Santiago Bernabéu. 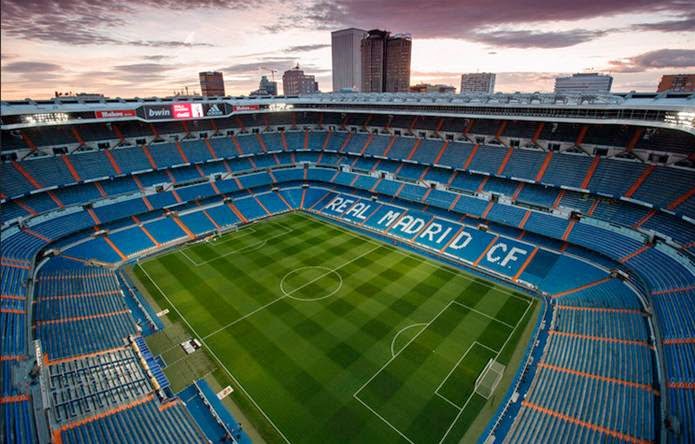 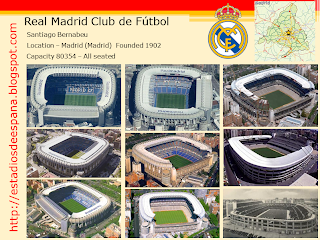 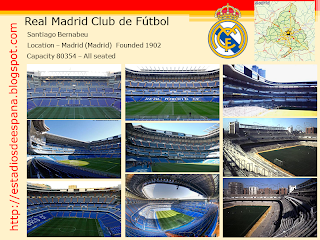