Real Sociedad may have used three stadiums since its formation on 7 September 1909, but some 20 years after closing, it is Atotxa that is still viewed as the club's spiritual home. Life may have started out at the Campo Hípico de Ondarreta, the city’s old racecourse, but it was in 1913 that Sociedad put down its roots at the mythical Campo de Futbol Atotxa.
Atotxa, was cramped, crumbling and hopelessly inadequate. It was also atmospheric, intimidating and above all, it was home. Wedged between the main railway line, the fruit market and a 20 storey office block, it was lovable, but ultimately doomed. Opened on 4 October 1913 and inaugurated with a match against perennial rivals Athletic Bilbao, Atotxa saw its one and only international match on 28 January 1923, when France popped over the border and politely rolled-over 3-0. On 4 May of the following year, it hosted the Cup Final. Fittingly, fellow Basques Real Union prevailed with a 1-0 victory over Real Madrid.
In its early days, Atotxa featured a very ornate main stand. Unusually for a wooden construction of this era, it was twin decked and ran the length of the pitch. Opposite the main stand stood a large open bank of terracing, whilst either end of the ground featured thin strips of bleachers. It then began to develop in a rather piece-meal fashion as assorted covers were added. As the club started to establish itself in La Primera, the main stand was replaced with a curious structure that had a central section of three narrow tiers of seats, including the Presidential Box.  Either side of this central portion stood larger banks of seats under a curved roof.
In the late fifties, the municipality acquired land at either end of the ground and built two identical stands that featured narrow terraces up tight to the touchline and covered seating behind. The north end became known as La Portería de Frutas, due to the close proximity of the fruit market, whilst the southern end was known as el Fondo de Mujika, after the furniture factory that had previously stood at that end. Finally, the open bank which had featured a rickety assortment of roofs at the back of the terrace, got a more substantial cover in the 1970’s, with a with bench seating added at the rear and sides.
During the 1940's Real Sociedad were a typical yo-yo club,flitting between La Primera and La Segunda on no less than seven occasions. During the 1950's the club established themselves in the top flight but the fifth place achieved at the end of the 1950-51 season was their best finish. The club was relegated to La Segunda in the mid sixties and spent five seasons trying to regain their place in the top tier. They returned in 1967 with added vigour and finished in the top ten throughout the seventies.
As years passed however, it lagged far behind the stadium developments found elsewhere in , and by the time of the 1982 World Cup, it was overlooked as a host. Simon Inglis, in his book The Football Grounds of Europe was well aware of Atotxa’s inadequacies, but loved it all the same. He described the stadium thus…  “Holding 27,400, the ground is an intimidating hothouse for visitors, covered on all four sides (each with a different style of roof) and barely a metre between its touchlines and perimeter fence. The white north stand roof, apparently concrete, is actually lath and plaster, and the general facilities are basic, to say the least.” Have a look at this footage

Hey but Sociedad’s fans didn’t care, particularly when the team won back to back titles in 1981 and 1982, followed by a Copa del Rey win in 1987. The title win in 1981 was won in dramatic circumstances, with practically the last kick of the season. You can read about this most dramatic of seasons and see the final match unwind here. This success however, would prove its undoing. With no space to develop and better facilities for players, officials and fans a must, Real Sociedad played their final match at the stadium on 22 June 1993. The stadium lingered on for a few more years, before being finally demolished in 1999. The site is now occupied by housing and the fruit market is the new Palacio de Justicia. For some strange reason, the municipality have kept the truly awful office block.

Atotxa was also the scene of one of the most symbolic actions in Spanish football history. On 5 December 1976, Sociedad’s Inaxio Kortabarria and Athletic’s Jose Angel Iribar walked onto the pitch carrying the Ikurriña, the flag of the Basque nation. It was almost exactly a year after General Franco’s funeral and the years of oppression by his Nationalist regime were still a fresh and open wound. The flag was still outlawed at the time, but this was a sign of unity and defiance on behalf of the Basque nation. 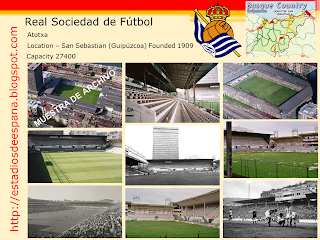