The history of the Estadi Olimpic has two very distinct periods. The first ran from the late 1920's to the mid 1950's and a second, more familiar phase, that started with the redevelopment of the site in the late 1980's for the 1992 Barcelona Olympics. So let's go back 80 years or so to a Spain that was under the dictatorship of Primo de Rivera and vying for a more prominent position on the international stage. Spain's reputation had taken one hell of a shoeing with the loss of Cuba and The Philippines, it's last significant colonies, in the Spanish-American War. The hosting of the 1929 International Exposition at Parc Montjuic, was an ideal opportunity to show the World that the country was back on its feet and a serious player once again.
Every Expo has it's centre-piece, but Barcelona upped the ante with two, the stunning Palau Nacional and the Estadi Olimpic de Montjuic. Designed by Pere Domènech i Roura, the stadium was also the focal point for Barcelona's unsuccessful bid to host the 1936 Olympiad. It featured a host of essential items that any self-respecting monumental stadium should include; Palatial Facade - Check, Bell Tower - Check, Central Cupola - Check, Over-sized Marathon Gate... oh, you get the picture. It had a capacity of 55,000 spread out over two tiers, with a propped roof over the west side. Its first football match took place on 20 May 1929, when a Catalan XI beat Bolton Wanderers 4-0, but with no resident team, the venue was scratching around for viable attractions once the Expo had closed its doors.
The start of the first professional league in Spain saw the stadium host 3 matches featuring Barça, Espanyol & Europa, but in truth Montjuic continued to see little action, particularly following the rise of the Second Spanish Republic in 1931. Maybe it was seen as inextricably linked to Rivera's dictatorship, but it did get to stage three finals of the Copa del Rey in the early 1930's. It was then pencilled in to stage the People's Olympiad, a protest event against fascism following the rise of the Nazi government in Germany prior to the Berlin Olympics,  This was hastily cancelled however, on the eve of the event due to the outbreak of the Spanish Civil War.
After the war and with Franco in-situ, the stadium got a short spell as the premier venue in Spain, hosting a further four finals of the Copa del Rey including Sevilla's 6-2 victory over Racing Ferrol (Franco's home town club), the occasional Espanyol- Barca derby and  five visits by La Selecion. But even the Generalissimo could not stop the rot and from the late-forties events practically dried-up. The stadium hosted the Mediterranean Games in 1955 and got one last hurrah in 1957 when Barcelona beat Espanyol 1-0 in the final of the Copa del Rey. In the 1970's sport returned to Montjuic when the Spanish Grand Prix was raced around the roads of the park. The stadium however, had the ignominy of being a makeshift paddock and car-park.
Roll forward to 18 October 1986 and Barcelona had just beaten perennial runners-up Paris to win the right to host the 1992 Summer Olympics. Central to the bid is the crumbling old stadium at Montjuic and its 8500 million peseta re-fit. Under the direction of Italian architect Vittorio Gregotti the interior of the stadium would be transformed, with the pitch being lowered 11 metres, two new tiers holding 70,000 spectators constructed and new cantilevered roof going up over the west side. The palatial facade of Montjuic would however remain intact, a stunning fusion of old and new. The renovation was completed in 1989, in time to host the Athletics World Cup and come the big day in 1992, few would disagree that Montjuic was the jewel in the crown of the most successful Olympiad to date.

A great deal of talking took place after the games, but like its previous incarnation in the 1930's, the new Montjuic did not see a lot of sporting action. Sure it hosted the omnipresent music concerts, in fact the Rolling Stones have played Montjuic more times than the La Selecion, but then they appear to have been around just as long. The only football it saw was when UE Sant Andreu played eight matches there in 1991-92 season, when their own Narcis Sala ground was undergoing renovation. As I mentioned in my earlier post on the Estadi Sarrià, RCD Espanyol came under increasing pressure to move to Montjuic, and after initial resistance, their debts became too great to ignore the municipalities offer. On 6 September 1997, the stadium hosted its first Primera match for over 65 years when Espanyol drew 1-1 with Celta Vigo.
I think the pictures speak for themselves, Montjuic is architecturally stunning and a great athletics stadium, but it doesn't work as a football ground. Espanyol took to closing the ends of the stadium and draping huge banners over the empty seats, in order that the fans who had paid to watch, were as close to the pitch as possible. Even a sell-out crowd Montjuic could not generate half the atmosphere of the cauldron that was Sarrià. Ironically, Espanyol enjoyed one of their most successful periods on the pitch whilst resident at Montjuic, winning the Copa del Rey in 2000 & 2006 and reaching the final of the UEFA cup in 2007. Unfortunately, they lost on penalties, just as they did on the previous appearance in the final in 1988. Espanyol's fans will tell you that the success  was in spite of Montjuic, not because of it.
The stadium was renamed  Estadi Olímpic Lluís Companys in 2001, after the former president of Catalunya who was executed by Franco's regime at Montjuic Castle in 1940 and in 2004, the final of the Copa del Rey returned to the stadium when Real Zaragoza upset the form book and beat Real Madrid 3-2. Two years earlier, Espanyol had paid 360,000 euros for 18 acres of old industrial land in Cornella-El Prat and set about the sometimes tortuous process of building a football stadium. Finally, on 31 May 2009, Espanyol's tenure at the stadium was over. A regulation 3-0 victory over Malaga was a low-key affair as the club and the fans only ever saw it as a temporary solution, albeit one that lasted 12 years.
Back to scratching around for events, the stadium hosted European Athletics Championships in 2010 and got a spanking new blue athletics track to boot, but the reality is that the stadium seems destined to be mothballed, only to be dusted off every so often and paraded like some relic from a bygone era. Rather fitting don't you think? 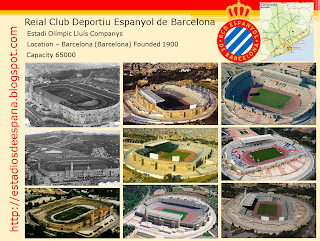 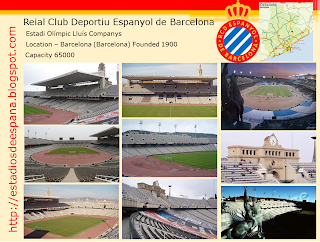