As the crow flies, Racing Club de Ferrol’s A Malata stadium lies 10 miles north east of the Estadio de Riazor, across the Ria de Betanzos. Racing is however, light years away from Deportivo La Coruña, and you expect that will be the case for a long time to come. Even on the rare occasions when they have met on the field, it’s nearly always been Depor who have come out on top. It’s enough to give the town an inferiority complex.
Over the years however, the town of has had a lot going for it. It has a long history as a naval port and it is still home to ’s North Atlantic Fleet. The financial trappings associated with the military also led to the development of a renowned shipbuilding industry and it was the site of one of ’s biggest arsenals. It was also the birthplace of General Francisco Franco and as any right-minded megalomaniac would do, he renamed the town in his honour. From 1938 until 1982, the town’s full title was El Ferrol del Caudillo, or Ferrol of the Leader. Franco’s ties with the town have led to the suspicious pointing of fingers at the one time Racing Club de Ferrol have made it to the national stage, but more of that later.
Racing was formed in 1919, when the towns first enclosed football ground, Campo de Caranza was opened and the best players from the top teams in Ferrol were chosen to play against Deportivo La Coruña. Such was the popularity of the team, that it was registered with the Spanish federation and started to compete locally in 1920. Racing soon had a ground of its own, when on 29 May 1921, they moved to a site that would be their home for the next 72 years. Initially called Campo de Inferniño, it was a basic enclosure a few hundred yards from the centre of town. The club first reached the second division in 1934, finishing in eighth and last place and were promptly relegated back to the Galician regional league. The Civil War put pay to any national competition until the summer of 1939, when out of the blue, Racing appeared in the final of a severely truncated version of the Copa del Generalísimo.
Racing was helped by a walk-over in the first round when an Asturias XI failed to show, then a favourable draw saw them dispose of a scratch Donostia side in the quarter-finals. Baracaldo Oriamendi was beaten 3-2 on aggregate in the semi final, which meant that Racing had a date in the final with probably the one quality side, Sevilla. Their luck ran out in the final however, when Sevilla handed out a 6-2 beating at Barcelona’s Estadi Montjuic. When the league resumed, Racing found themselves back in a regionalised second division and achieved their highest ever final placing of second, albeit behind perennial rivals Deportivo La Coruña. Is it too much to suggest that Racing achieved this without any intervention on high? Maybe not, after all Ferrol was a Nationalist stronghold in the civil war and the town and therefore the club, escaped any major damage. Add to that an influx of military personnel to potentially swell the playing staff, it is entirely possible.

The next two decades saw Racing established themselves in a regionalised second division, and although they only reached the play-offs once (a disappointing last place in the 1951-52 play-off group), the confidence within the club was such that in 1949, it embarked on a major redevelopment of Campo Infernino. The new stadium was laid out in an oval, with the main stand on the west side. The roof was cantilevered, but straddled the half-way line for 60 metres or so. Curved terraces ran around the north and south ends, whilst the east side had a substantial open terrace side. In the south east corner of the ground, a tower was built. Not as big or as grandiose as the one at the Riazor. No, this one resembled  the sort of tower one you'd see at fire station, but it was a tower all the same.
In 1953, the name of the stadium was changed to Estadio Manuel Rivera, after the loyal player and club physiotherapist who had died the previous year. In the 1960’s a cover was added to the east side and the roof of the main stand was extended. Racing was relegated from La Segunda at the end of the 1959-60 season, and over the next 30 years, their visits to the second flight became more infrequent. Time was called on Estadio Manuel Rivera on 4 April 1993, when Toledo beat Racing 0-1. Two weeks later, the club pitched up at A Malata, the new municipal stadium, a mile north-west of the town centre. Today you will find a small sports centre and a pleasant square on the sight of the old stadium. And the name of the square? Plaza del Infernino. 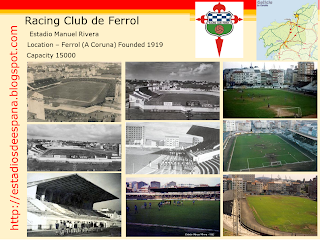