After 72 years in the centre of town at the Campo Infernino, Racing Club de Ferrol moved a mile north west to the edge of the Ria de Ferrol, where the municipality had built A Malata. This ever expanding sports complex now features an indoor pool, 5,000 seat indoor arena, separate athletics track, basketball, tennis & futsal courts, all-weather football pitches and a windsurfing lake. Oh yes… and a 12,043 capacity football stadium.

A Malata is a sports complex that the 75,000 inhabitants of Ferrol can feel justifiably proud (Bristol City Council, take note). It also has to be said that the stadium is a fresh, clever and distinctive piece of design. Designed by a collaboration of five architects (Juan Pérez López de Gamarra, Francisco Iglesias Miño, Juan Rey-Cabarcos, Vicente Fernandez Couto and Alfredo Alcalá Navarro), It incorporates the indoor pool into the overall body of the stadium. This  creates an almost circular structure, whilst maintaining a square sided football ground within. The seating  consists of a single tier of grey seats, all under the cover of a cantilevered roof. The side stands run square to the pitch, whilst both ends arc behind the goals. There is a liberal splash of Racing’s green throughout the stadium, which in recent seasons has included the pitch. This was not the case for  the first decade of the stadium’s life, as the pitch  had a  habit of turning into a swamp from October onwards. Like the stadiums in León & Santiago de Compostela, tall floodlights stand away from the stadiums perimeter and peer over the stands and onto the pitch.

A Malata was first used by Racing on 18 April 1993 in a 3-2 win over Atletico Madrid B. This was the club’s first season back in Segunda B after a two year spell in the Tercera, and whilst the new stadium had a stabilising effect on the club, it would be a further eight years before Racing gained promotion La Segunda. Those eight years saw Racing reach the play-offs and fall on three occasions, until a successful fourth attempt saw them overcome Barakaldo CF, AD Ceuta & CF Gandia. Back in La Segunda for the first time in 21 years, Racing’s form was mediocre and after 3 seasons, they returned to Segunda B. They then spent the next five seasons flitting between La Segunda and Segunda B, before two successively poor seasons saw them back in the Tercera for the 2010-11 season. Racing finally returned to Segunda B in 2013, winning the Tercera title and disposing of Basque side Laudio in the play-offs.
A Malata is a stadium deserving of a higher stage. Its clean lines and functional simplicity mean that it still looks fresh 20 years after opening. Racing still has some way to go before it is back playing on a national stage. But maybe, just maybe, they may finally get  one over on Depor. 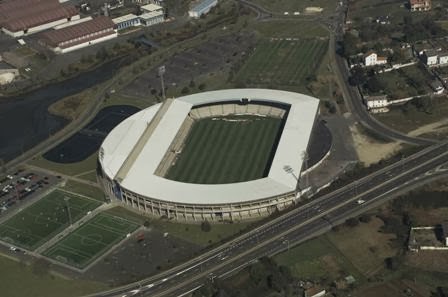 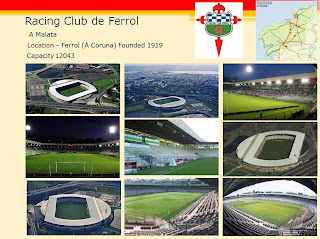