The history of Unió Esportiva Sant Andreu can be traced back to the formation of Club de Futbol Andreuenc in 1909. Two years later, a group of players split from the club and formed L'Avenç del Sport and it was this club that achieved relative success by competing in the Campeonato de Cataluña in 1920-21 & 1921-22. In June of 1925 the two clubs merged to form the current club.
The club played at Campo de la Calle Santa Coloma, a ground occupied by L'Avenç del Sport since 1914 and this would remain their home until 1969. Sant Andreu worked their way through the Catalan regional leagues and the Tercera to reach La Segunda for the first time in 1950-51. The first season saw them finish fourth and miss out on a play-off berth by one place and three points. The following season saw the club finish twelfth and during this period, Sant Andreu played a few matches at FC Barcelona's Les Corts stadium in an attempt to raise additional revenue. After an eighth place finish in 1952-53, the club resigned from La Segunda due to financial difficulties and returned to the regional Tercera.
The club spent the next 16 years in the Tercera, but at the end of the 1968-69 season, after winning the league, the club entered to the play-offs and beat CA Osasuna and CD Alcoyano to seal promotion to La Segunda. During the close season, the Campo de la Calle Santa Coloma was demolished and the current stadium took shape on the same site, albeit 50 metres further south. The new ground was not available for the start of their return to La Segunda, so Sant Andreu played their first nine home matches of the 1969-70 season at RCD Espanyol's Sarriá stadium. The new stadium was named Campo de Fútbol del C.D. San Andrés and was inaugurated on 19 March 1970 with a friendly against FC Barcelona. Floodlights were switched on in April 1972 and the ground was full to it's 18,000 capacity in 1972 when the club held Real Madrid to a 1-1 draw in the Copa del Rey.
There followed the longest period of sustained success with eight seasons in the second tier and a highest finish of sixth in 1972-73. The club dropped to the newly formed Segunda B for the start of the 1977-78 season, and three seasons later found itself back in the Tercera. In 1980, the ground was renamed Estadi Municipal Narcis Sala in honour of the club president who over saw the building of the new ground. The ground was closed for two matches in 1982 due to crowd trouble so the club travelled a few miles south east of Narcis Sala to CD Badalona's Campo de Centenario. After spending the whole of the 1980's in the Tercera, Sant Andreu returned to Segunda B in 1990, and at the start of the 1991-92 season, the club played 8 matches at Estadio Olímpico Lluís Companys, but the work that the local municipality had promised to conduct on Narcis Sala never materialised, so the club moved back home to an unchanged stadium.

Sant Andreu has won its division in Segunda B on two occasions, 1991-92 and 2009-10. In 1992, the club met CD Lugo in the final match of the play-off group. Sant Andreu needed a draw to gain promotion to La Segunda and were denied a stone-wall penalty. If converted, they could have drawn the game and won promotion. As it was, Lugo won 2-1 and spent the following season in the second division. Still the fans seem to have gotten over it, although they have set up  this website to help them vent their collective spleen.
In December 2010 Narcis Sala underwent a makeover and whilst it now looks like it has been constructed out of Duplo bricks, it is an improvement for a stadium that seemed destined to be beige for ever more. The whole area around the stadium has undergone a face lift with the new metro Station, Onze de Septembre opening in 2010 literally on the stadium's doorstep. In September 2013, a new artificial surface was installed at Narcis Sala, so the club decamped to the Camp de Porta in the neighbouring district of Can Dragó for a couple of matches. Narcis Sala is now a 6,900 seat stadium, and whilst it is essentially an ageing stadium, with one short basic cover, should the club gain promotion back to La Segunda, it will suffice, and Sant Andreu should not have to go on its travels to raise money again. 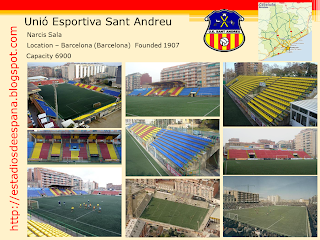