For those of you that have seen pictures of Benidorm in the late 1950’s, when it was little more than a fishing village, it will come as no surprise to learn that football came late to the tourist capital of the Costa Blanca. It wasn’t until the first skyscrapers were built and the holidaymakers arrived that Benidorm Club de Futbol was formed in 1964.
The newly formed club made a bright start in the regional leagues and reached the Tercera for four seasons in the late sixties. This coincided with a move from their Campo Lope de Vega to the Estadio Municipal de Foites, which was a simple ground to the west of the town, well away from the high-rise and high-jinx. A change of name to Benidorm Club Deportivo in 1970 did not have a positive effect and the club was relegated to the regional leagues in 1971, which began a decade-long slump. The club returned to the Tercera in 1982 and then in 1987, won promotion to Segunda B for the first time. The club spent 19 of the next 24 seasons in Segunda B, with any relegation being quickly resolved, but surprisingly it has only made the play-offs once. In 2007-08 Benidorm finished in fourth place and were drawn against Rayo Vallecano in the semi-final round. After a 1-1 draw in Benidorm, the team from Madrid won through with a 1-0 victory.
Much to the discontent of its followers, the club changed its name back to Benidorm Club de Futbol in 2009 and also agreed a sponsorship deal with the local tourist board, one of the first of its kind in Spain. This saw a change from the popular blue & white "Ajax-style" kit to an anodyne white shirt with large tourist board logo. If the supporters thought the additional sponsorship money would herald the start of a prosperous new era, they were sadly mistaken. A promotion challenge fizzled-out in 2009-10 and worse was to follow. The majority of the 2010-11 season was played against a back-drop of financial woes. Bills went unpaid and so did the players, so it came as no surprise when the club managed to win just 3 of its final 20 fixtures. Finishing in 16th place, Benidorm was paired with Real Betis B in a loser-gets-relegated decider. Having drawn the home leg 1-1, Benidorm travelled to Sevilla on 29 May 2011 and lost 3-1 in what was to be their last ever match. Unable to pay the players wages at the end of the season, the Spanish Federation demoted the club to the Valenciana regional league and the club folded on 22 July 2011. Football continues in Benidorm, albeit at a very low level. The town's oldest club, CF Ciudad de Benidorm play at the athletics arena next to the football stadium.

In 2010, the stadium's named was changed to the Estadio Municipal Guillermo Amor, after the Benidorm-born midfielder who went on to great things at Barcelona. Little else has changed at the ground since it opened in 1968. Essentially it is made up of two strips of terracing on either side of the pitch, with the southern side housing the changing facilities and a press box. Around 500 seats in blue and white bands are also installed on this side. The opposite side of the ground is a plain terrace, which was extended in 2003. The back wall of the original terrace ended where the access vomitories are located. In total the ground can accommodate 9,000 spectators, but attendances rarely reached into four figures  when Benidorm CF played.
The stadium is unlikely to see anything approaching professional football for many years to come, although Ciudad de Benidorm play in front of a few hundred fans in the Regional Preferente. However the stadium does play to capacity crowds on a regular basis. You see the municipality make the ground pay by staging open-air concerts during the summer months. So it seems certain that the Rolling Stones, Elton John, Bruce Springsteen et el will make return visits before any top quality football. 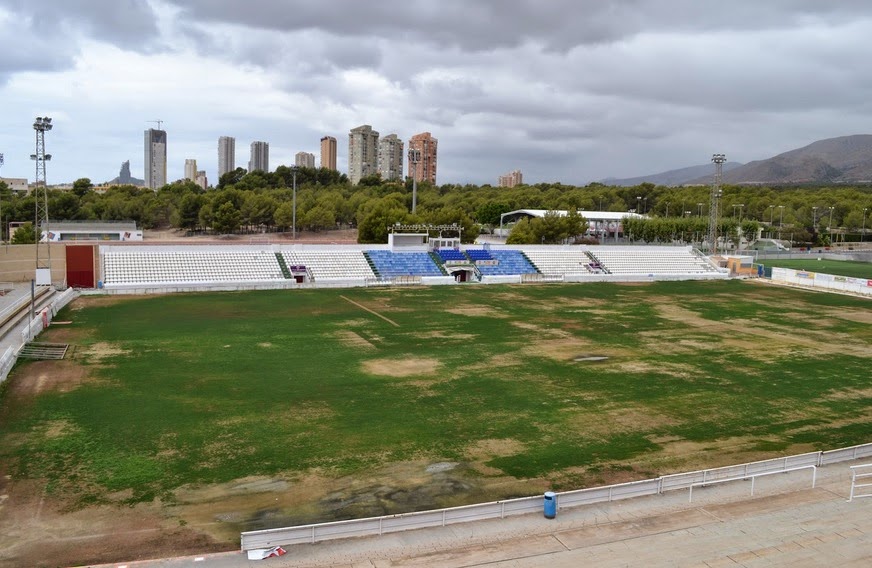 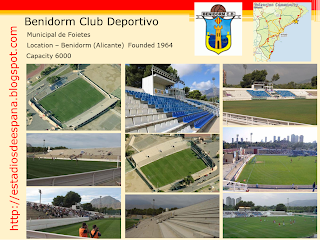