For a club that goes by the nickname of  El Glorioso, Deportivo Alavés is currently down on its uppers. This historic club from the heart of the Basque country has experienced some dizzying highs since forming in 1921, becoming the darlings of Spanish and European football a little over a decade ago. How quickly things can change, for within 8 seasons of playing in a Uefa Cup final, Alavés were playing in  Segunda B's regional leagues.
With Basque neighbours  Athletic Club de Bilbao, Real Union and Real Sociedad already well established, success came quickly to the fledgling club, entering the Federación Vizcaína in 1925, due to the absence of such a body in Alava. Successive promotions saw the club challenge Athletic Club for the Campeonato Vizcaíno in 1927-28 as well as reach the semi-finals of the Copa del Rey. Keen to progress, Alavés entered the qualifying competition to partake in the first La Liga season, but finally had to settle for a place in the inaugural season of La Segunda. The club led the way for much of the season, but eventually came up short, finishing third, a point behind champions Sevilla. A year later, Alavés won La Segunda title and promotion to La Primera. Their debut in La Primera got off to a dream start and the club topped the league at the end of week 3. They came back to earth with a bump a week later with a 7-1 defeat at  Athletic Club and eventually finished eighth. Alavés managed to stay in the top tier for another two seasons, but two successive relegations followed and the club was  playing in the regional league for the start of the 1935-36 season.

The club has played at its Mendizorroza home for all but the very first three years of its existence. In those first few seasons, the club used a field on Camino de Lasarte, then in 1924 they moved the the south west edge of town where Vitoria's first sports complex was being developed. This included a swimming pool, a Velodrome and an enclosed football ground. By the time of their top flight debut, Mendizorroza had a capacity of 8,000, with a short, but rather ornate stand on the north side of the ground. The southern side of the ground was made up of open terracing, but in 1935, an art deco-style radio tower was built above the terrace. Alavés won promotion to the Tercera in 1943, but it would take a further eight seasons before its status in La Segunda was restored. The club won the regionalised second division title in 1953-54 and with it, promotion back to La Primera. They managed to remain in La Primera thanks to a last day victory at Racing Santander, but the following 55-56 season saw the club finish 14th and enter the relegation play-offs. In a mammoth 6 team tournament, Alavés finished bottom and dropped a division.
Alavés remained in La Segunda for the rest of the fifties, and flitted between the Tercera and the second tier throughout the 1960's. The combination of a lowly ninth place and reorganisation of the Tercera saw the club drop into the regional league for the 1970-71 season, but  within four years it had returned to the second division and remained at this level until 1983. Such is the up and down nature of the club's history, this period of nine fairly anodyne seasons on La Segunda is the longest period it has remained at the same level. Alavés started the 1983-84 season in Segunda B, but attempts to regain their place in La Segunda and the redevelopment of the ageing Mendizorroza, saw the club rack up huge debts. With the players going unpaid throughout much of the 85-86, Alavés was demoted to the Tercera. Their  followed a desperate couple of seasons where the future of the club was seriously in doubt and performances on the pitch saw them stuck in mid-table. Then, in 1989 Juan Arregui Garay became president and the next upward cycle in Alavés history began.
﻿Under Arregui's presidency, the club was transformed, but not without some initial frustrations, none more so than the five attempts it took to escape Segunda B in the early to mid 1990's. Alavés made comparatively short work of the second division, winning the title in its third attempt and with it, promotion to the top tier after a 42 year absence. Salvation in the 1998-99 season went right down to the wire, with the club securing its place in La Primera with a 2-1 victory over neighbours Real Sociedad. By now, the club had installed José Manuel Esnal 'Mané' as coach. He had achieved some success at UE Llieda, but he was about to lead the club on an adventure that would culminate in playing in one of the most memorable of European finals. The run to the final of the 2001 UEFA Cup Final in Dortmund had come about thanks to a highest ever finish of sixth in La Primera in season 99-00. On route to the final, Alavés disposed of Internazionale, Rayo Vallecano and Kaiserslautern. In the end, they came up just sort, losing an epic final to Liverpool in extra-time, by 4-5. The club would be unable to match the highs of the 2000-01 season and their followed a gradual decline, before dropping to La Segunda in 2003.

The club sold a 51% share to American/Ukrainian Dmitry Piterman in 2004, and as followers of the Spanish game and supporters of Racing Santander & Palamos will testify, this usually ends in tears. Initially, the club responded well to relegation, finishing fourth in 2003-04 and winning promotion back to the top flight in 04-05. The return to La Primera was short-lived and amidst rumours of financial difficulties, the club dropped back into the second division a year later. Relations between Piterman, the rest of the board and the players deteriorated, not helped by the non-payment of wages. Finally in March 2007, Piterman sold his stake in the club, leaving it €23m in debt. Facing closure and unable to compete, Alavés struggled on in La Segunda before being finally relegated at the end of 2009 season. They were now a big fish in the considerably smaller pond of Group II of Segunda B, and they soon found that not everything was to its liking. Alavés missed out on promotion for three successive seasons, before finally wining the Segunda B title and disposing of Real Jaén in the Play-offs.
Mendizorroza did look distinctly out of place in Segunda B. It's 19,200 blue & white seats are all covered by roofs that are a barely decade old. It stood side by side with small municipal Campos de Futbol that hold a couple of thousand spectators, when it would not look out of place in the top division. The newest part of the stadium is the main southern Tribuna that was erected in in 2000 and houses the club offices as well as changing facilities. Its large single tier is housed under a perspex and steel cantilevered roof. The three remaining stands date from the early 1980's but were extensively refurbished following the club's ascent to La Primera in 1998. The roofs of these three stands are identical propped post & beam constructions, whilst cantilevered corner stands were also added during this phase of refurbishment.
Mendizorroza and  Alavés stand out as a warning to clubs in the the top flight, that the obscurity of the regional football is just a couple of short steps away. Also, if Dmitry Piterman comes calling, don't answer the door! 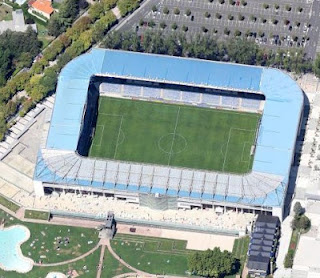 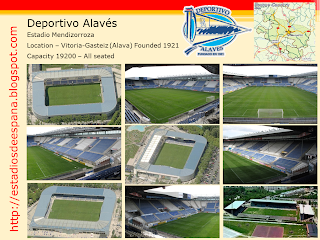