UDA Gramenet was formed in 1945 through the merger of three clubs, namely FC Gramenet, UD Colomense and CF Baleares. It took another decade to reach the Tercera and for the next 15 years, the club flitted between the Tercera and the Catalan Primera. The Seventies saw a decline in the clubs fortunes and between 1970 and 1986, Gramenet spent only two seasons in the Tercera. In season 1986-87 the club returned to the Tercera and after a decidedly wobbly first season when they finished 15th, it began to establish itself, in part thanks to the financial support of club sponsor Ferrolán, a local building merchant.
After winning the regional Tercera in 1991-92 but failing in the play-offs, Gramenet finally won promotion to Segunda 2b at the end of the 1992-93 season. A second place finish in the league saw the club enter the play-offs, where Pinoso CF, CD Mallorca Atlético and Agrupacion  Mar Menor were overcome. Their first season in Segunda 2b was also the last season in which they used their cramped Camp del Fondo home, but what a send off the old stadium was given. Despite being one of the favourites for the drop, Gramenet confounded all and sundry and won the Group 3 Segunda 2b title by a whopping ten points. In the play-offs for La Segunda, they were pitched against, CD Ourense, Real Jaén CF and Sestao SC, but finished last in the group. Failure to progress via the play-offs would be something that Gramenet would have to get used to in the coming seasons.
The club moved to the new municipal ground just south of Santa Coloma de Gramenet on the Rio Besos for the start of the 1994-95 season and their consistency in the league continued with a second place finish, but this time the club finished third in the group behind Deportivo Alaves and UD Las Palmas, but above Real Jaén CF. In 1995, the club merged with local team CD Milan and the club's official and rather lengthy title became Unión Deportiva Atlético Gramenet Milán. A third visit to the end of season play-offs was secured at the end of the 1996-97 season, and whilst it was their best performance to date, a second place finish behind Xerez CD, it was not good enough for promotion.
The next play-off outing occurred in 1999-00 after finishing in third place in the league. The play-off group also featured Real Jaén CF, Gimnastica Torrelavega and CD Ourense and all four clubs entered the final set of matches with a chance of promotion. However, a 3-1 defeat in Torrelavega saw Gimnastica promoted. A second Segunda 2b title was secured in 2000-01, but five defeats and a draw saw the club finish bottom of the play-off group behind Xerez CD, Cultural Leonesa and CD Toledo. In season 2002-03, Gramenet scraped into the play-offs by securing fourth place on the final day of the regular season. Ironically, their weakest performance in qualifying for the play-offs brought about their strongest showing. Grouped with. Málaga B, Real Unión Club de Irún  and UD Lanzarote, Gramenet entered the final set of matches in first place... but you've guessed it, a 1-1 draw with Real Union and a 3-0 win by Malaga B over Lanzarote saw the Andalucians promoted at Gramenet's expense.
Away from the league, Gramenet had their best ever run in the Copa del Rey in 2004-05, beating FC Barcelona, Levante UD and UE Lleida to reach the quarter finals. They finally fell to Real Betis 5-6 on aggregate. The latest visit to the play-offs occurred at the end of the 2005-06 season, but with the new knock-out format, UD Salamanca quickly put Gramenet out of their misery with a 3-6 aggregate victory. The quality players and the money dried up in recent seasons and the club dropped back to the Tercera at the end of the 2010-11 seasons. Their woes have continued this season and the club looks destined to drop to the regional Preferente for the first time in over 25 seasons.
The Nou Camp Municipal de Santa Coloma or Can Peixauet, saw its first official match in September 1994 when Gramenet beat CE Premia 1-0. Its dominant feature is a 2,000 seat cantilevered stand on the east side of the complex. In front of the stand and running around the pitch is a ring of three rows of seats. Hard standing behind the seats takes the capacity to 5,000. It is a perfectly functional if somewhat unremarkable and formulaic stadium, the perfect antidote to the highs and lows that Gramenet's fans have endured over the past two decades. 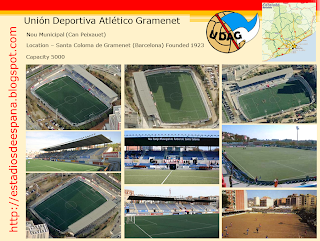 Labels: Barcelona, Catalunya, Tercera or Below