On 20 May 2001, after two and a half years stuck out on the southern ring road at Estadio Puente Castro, Cultural Leonesa returned to the centre of the city and the newly built Estadio Antonio Amilivia. They played host to Xerez CD in the play-offs and won 1-0 with Iban Espadas scoring the only goal. However, it was Xerez who had the last laugh, prevailing in the old league format to win promotion to La Segunda. Indeed the play-offs have been particularly unkind to Cultural as they have reached the end of season shake-up for La Segunda on 9 occasions and have yet to progress.

Work started on the municipally-owned stadium in 1999, with the aim of delivering a modern stadium and indoor sports facilities at a cost of €10.8 million. As time progressed, the project slipped over budget, and by the time the final cost had been calculated in 2002, the sum had risen to €18.6 million. In 2008 the stadium was renamed Estadio Reino de León or Kingdom of León Stadium and is one of the more stylish medium sized stadiums to have been built in Spain in the past 20 years. Similar in design to A Malata in Ferrol, it has a capacity of 13451, all contained in a single sweep of blue and white seats. The front row of seating is five foot above pitch level and each end of the stadium curves behind each goal mouth.
Leaning over the roof are four over sized floodlights. The stadium presents a similar problem to those experienced at San Lazaro in Santiago de Compostela, in that the oval shape and relatively low roof mean that the lights need to lean into the arena. Rather than go for the crane-style favoured by Compostela, they have chosen a design that would not look out of place in the vast concrete bowls that were built in the eastern bloc in the 1960's. The structure also contains considerable office space and as you would expect from a new municipal stadium, indoor sports facilities that host the city's basketball & handball clubs. The stadium also stages the ubiquitous summer concerts. Mrs Gerard Piqué, AKA Shakira has graced the turf, but sadly not the Kings of Leon.

The stadium played host to a full international when La Selección paid a visit in April 2003 for their Euro 2004 qualifier against Armenia. A capacity crowd saw Spain win 3-0. Regrettably, the locals did turnout in sufficient numbers to watch Cultural and in recent seasons, form dipped on the pitch and money dried up in the bank account. In February 2011, faced with the very real threat of closure, the club was bought by José Luis Tamargo and guarantees were given to complete the 2010-11 season. With players debts still outstanding, the Spanish Federation relegated Cultural to the Tercera for the 2011-12 season. A new chapter began and following two seasons in the fourth tier, promotion to Segunda B was secured with a play-off victory over Universidad de Oviedo. With the stability of a permanent home, returning support and a committed president, maybe Cultural can go on to write their own little piece of history in the Kingdom of León? 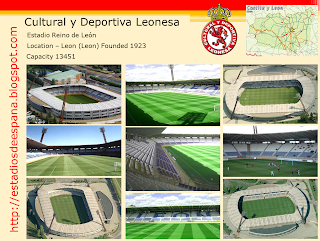