Is there a Spanish equivalent of Rovers or Wanderers? El Vagabundo? El Viajero? Maybe not, but Cultural Leonesa are on their seventh permanent ground in 88 years, not to mention three other temporary solutions they have used. Cultural y Deportiva Leonesa, to give them their full title, was founded in 1923 and started playing at El Parque, where for the 1929-30 season, Leonesa reached La Segunda. In 1931 they moved to Campo Guzmán, which was situated to the west of the city, on the bank of the Rio Bernesga. It had a short 40 metre cover on the west side and a decent bank of terracing on the east side.
The area was redeveloped in 1939 So the club had to leave and used the grounds at El Seu or San Mames as it was also known, for a season. Then in 1940 the club played at La Corredera and it was here that the club made a second appearance in La Segunda, with three seasons of mediocre finishes in the early 1940’s.  The club had to sell El Corredera and move to the smaller Campo El Ejido in 1948.
Back in the Tercera, Leonesa struggled to make progress until Antonio Amilivia arrived as president. The club returned to La Segunda in 1953-54 and secured their highest final placing of fourth and in the following season, Leonesa achieved promotion to La Primera when they finished first in Group 1 of the regionalised La Segunda. This presented a massive problem for the club as even by 1950’s standards, El Ejido was simply not up to hosting top flight football. Luckily the Municipality took the initiative and in what must have seemed like a scene from an Amish chapel build, constructed a new ground at La Puentecilla in little over three months.
On 23 October 1955 27,427 spectators watched Leonesa play Athletic Bilbao in the first match at La Puentecilla, and although Athletic won 1-3, the club collected over 1 million pesetas at the gate and this remains the highest attendance in the club's history. Regrettably the stay in La Primera was a short one, one season to be precise. Leonesa's return of 5 wins, 4 draws and 21 defeats is the worst in the history of La Primera. The club remained in La Segunda until 1962, before dropping to the Tercera. Leonesa returned to La Segunda at the beginning of the 1970’s, but by 1975 were back in the Tercera, by which time the stadium had been renamed in honour of Antonio Amilivia.
The main stand at La Puentecilla was a single tier of seating with a low propped cantilevered roof and very similar in style to the old stand at Pontevedra’s Pasaron stadium. The remaining three sides were made up of decent sized terraces, and behind the north terrace stood a tower which also incorporated a scoreboard. On 31 October 1998, Barakaldo was defeated 4-1 in the last match at the ground. La Puentecilla and its surrounding tenements were soon demolished, but all memories of the old stadium have not been erased. The Calle La Puentecilla, a nondescript suburban street, follows the line of the old north terrace and its grand old tower.

The municipality had plans for a new stadium a mile or so west of La Puentecilla close to the banks of the Rio  Bernesga, but this was still at the planning stage, so for the better part of 3 seasons the club played at Deportiva de Puente Castro. This was far from ideal as it offered basic facilities for fans and even less in the way of cover in what can be the coldest region in Spain. It had a maximum capacity of 4,600 and you can see some excellent pictures of the stadium here, as those clever people from Euro-stades paid a visit back in March 2010. 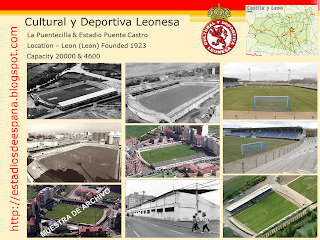