San Javier is the main town on the Mar Menor, Europe's largest salt water lagoon. A number of clubs have incorporated the lake in their name, the latest being Mar Menor Club de Fútbol. Formed in 2007 following the closure of AD Mar Menor, both clubs have used Estadio Pitin, a basic enclosure just to the east of  the main centre of town.
Agrupación Deportiva Mar Menor-San Javier, to give them their full title, was founded in 1980, reaching the Tercera in 1988. Here they gradually progressed before finally winning promotion to Segunda B thanks to topping their play-off group at the end of the 1995-96 season. Their first season in the third tier saw the club finish 16th, and enter the relegation play-offs. Here they lost to CP Almeria, but trounced SD Huesca 6-1 on aggregate to secure another season in Segunda B. Unfortunately, the 1997-98 season was an unqualified failure, with AD Mar Menor finishing bottom of the league and 13 points from safety. The club continued in the Tercera for another nine seasons, even winning the title in 2003-04, but eventually folding in the summer of 2007.
As is often the case in Spain, when one clubs dies, another club steps into its boots whilst they are still warm. Mar Menor CF was set up within days of the closure of AD Mar Menor. They made their debut in the Tercera for the 2010-11 season and finished third. It was paired with Loja in the play-offs, losing 0-1 on aggregate. The club also finished third in 2011-12, but this time Club Portugalete had their number. A third successive third place finish saw Mar Menor enter the play-offs again, and this time progress to the finals after victories over Estrella CF & Haro Deportivo. They were paired with the Basque champions CD Laudio, with the winner earning a place in Segunda B.
The Estadio Pitin was originally opened in 1945, and despite its very basic appearance, it has some nice touches. This is primarily thanks to the €430,000 make-over it received in the summer of 2010. The principal feature is a short, 15 metre cantilevered stand on the north side of the ground, which has seating for around 80 at the front, and four palcos or booths at the rear. A few steps of terracing make up the remaining three sides of the ground. 2010 also saw the replacement of the patchy and bumpy playing surface with a state of the art artificial pitch. The players and officials enter the playing area in the south west corner of the ground as the changing facilities and club offices are housed behind the west terrace. The new facilities were officially inaugurated on 21 October 2010, with a friendly against Hércules CF. The Estadio Pitin has more than a passing resemblance to UD Horadada's Ikomar ground, which is no more than 5 miles north east of San Javier. 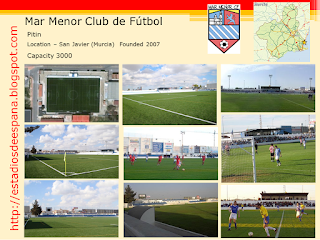