You’ll find the town of Pilar de la Horadada as you head south towards Murcia on the Autopista del Mediterrani. So close is the town to the border with Murcia, that the local team, UD Horadada registered with the Murcian, rather than Valencian Federation when it was founded in 1972. The club moved to its current home, Ikomar, in March 1974. Ikomar means hill in Basque, and quite why they’ve used the Basque language is a bit of a mystery, but it is perched on a hill, well more of a gentle incline, to the north of the town. You can read more about the club’s history on this excellent fans website.
Horadada has spent all but one season plying its trade in the regional or Tercera leagues. The exception was in 1992-93 when they played in Segunda 2b. Unfortunately they finished in 20th and last place, thirteen points from safety. They also reached the third round of the Copa del Rey and held Deportivo La Coruna to a 1-1 draw at Ikomar. The return leg at the Riazor was not as close with the Galicians winning 9-1. Horadada switched to the Valencian Federation in  2006, when the Spanish Federation ruled that all clubs must play in their respective region. Since the 2007-08 season the club has played at a regional level, due in part to the club selling its place in the Tercera to Villarreal C to ease financial problems. As for Ikomar, it really is a basic an enclosed ground as you can find, with a raised area of nine steps come seats on the halfway line and a few steps or hard standing around the rest of the pitch.
Have a look at a proper blog from the genius that is The Groundhog. He visited Ikomar as recently July 2011 when FC Cartagena & Albacete Balompie borrowed the ground for a pre-season friendly. You can see that not a great deal has changed. Well actually, nothing at all has changed. 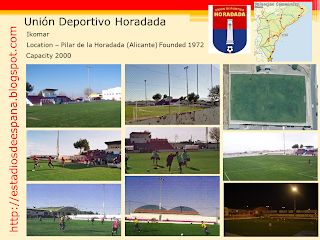