Football has been played in this part of Murcia since the early twenties and the direct ancestor of today's club, Jumilla Foot-Ball club was formed in 1929 when Sport Jumilla FC and Athletic Club Jumilla merged. To be honest, this particular incarnation achieved very little, its peak arriving in the early 1960's when the club reached the Tercera. Following a poor showing in the 1966-67 season the club was disbanded and for eight years the city had no senior team.
The current club, Jumilla Club de Fútbol, was formed in 1975 and worked its way through the regional leagues to reach the Tercera in 1981. Its four season stay saw a high finish of tenth, and a move to its current La Hoya stadium, but it returned to the Murcian regional leagues at the end of the 1984-85 season. At the start of the 1990-91 season Jumilla was back in the Tercera and it has stayed at this level until it achieved promotion to Segunda 2b in 2010.
It entered the play-offs having secured its first Tercera league title, but the road to promotion was far from straightforward. Paired with the Asturian team Caudal Deportivo, Jumilla lost 1-3 on aggregate and entered the second eliminator round. Here they met Getafe B and after a 0-0 draw in Madrid they were favourites to progress. A 1-2 home defeat appeared to put an end to their hopes of promotion, but when Real Murcia was relegated from La Segunda at the end of June 2010, their reserve side Real Murcia Imperia, was demoted despite a finishing in thirteenth position. The Murcian Federation turned to the next highest placed team from their region to replace Imperia, and Jumilla duly took up the spot.
Regrettably, Jumilla's first season in Segunda 2b has been a nightmare. Things started brightly with a 2-1 win over local rivals Yeclano Deportivo, but a string of defeats followed whilst the club awaited completion of improvements to La Hoya. This consisted of adding a new roof to the only stand, laying a new athletics track and improving team and media  facilities. They returned to La Hoya in October, but form was poor and delays in paying the players did not help matters. The cost of running the team was proving prohibitive and soon the squad was being reduced and most of the team went part time. When Jumilla sold Jesús Limones to AD Ceuta the total of professionals in the squad dropped below the permitted minimum of four, and the club were docked 3 points. Unsurprisingly, Jumilla finished bottom of Group 4 of Segunda 2b and on 29 May 2010 the club was wound up. In the summer of 2011, FC Jumilla was formed and acquired the place vacated by Moratalla CF in the Tercera. 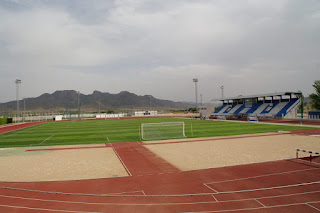 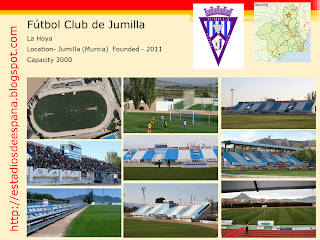