Now I need you to concentrate, as the history of football in Ceuta is a bit complicated. It’s not helped by several reincarnations of the leading team, and the small matter of Moroccan independence. So if you are ready, I’ll begin back in 1933 when Ceuta Club Sport, a fledgling team moved into the Campo Municipal de Deporte. The stadium was given the nickname of Docker due to its location close to the naval barracks. On opening, it had a capacity of 4,000.
Ceuta Club Sport found early success when it won the Campeonato Hispano-Marroquí, a regional championship set up in the Spanish Protectorate of Northern Morocco. It changed its name to Sociedad Deportiva Ceuta in 1941, and it was the Directors of this club who renamed the stadium in honour of Alfonso Murube, a former player who died in 1936, fighting for the Nationalists at the Battle of Aranjuez during the Spanish Civil War. The ground was extended to hold 6,500 in the early fifties.
﻿In 1956, Morocco gained independence from Spain which among other things, had implications for Atlético Tetuán, a team based 25 miles south of Ceuta. Formed in 1922, Atlético was a relatively successful outfit, winning La Segunda in 1950-51 and appearing in the La Primera in 1951-52. After independence, the team was dissolved, with the majority of Spanish born players joining Club Atletico Ceuta, a new club formed by merging the remnants of Atletico Tetuan with Sociedad Deportiva Ceuta. Club Atlético Ceuta took on Atlético Tetuan’s place in La Segunda and stayed there for 11 years, finishing second in 1960-61, but lost out to Elche CF in a promotion/relegation play-off. La Segunda was restructured in 1968 and AC Ceuta was relegated via a play-off with Jerez Industrial, which went to a third match. After six seasons at Tercera level, they dropped to the regional leagues and for the past few seasons has played in the Regional Preferente de Ceuta.

Agrupacion Deportiva Ceuta was formed in 1970, after disenchanted members of Club Atlético Ceuta felt the club had lost its mojo. A wise move as Agrupacion started to climb the leagues, reaching the newly formed Segunda B in 1977 and three years later, debuting in La Segunda. Their stay lasted just one season, but saw impressive victories against CD Málaga, Real Oviedo & Cádiz, however they finished bottom of the league with just 29 points. Back in the Tercera, Agrupacion only really threatened to gain promotion on one more occasion, finishing second in 1988-89. At the end of the 1990-91 season, with the club experiencing financial problems and unable to play its players, the federation demoted them to the Tercera. Despite registering for the new season, Agrupacion never fulfilled a fixture and was wound up. Football in Ceuta was in the doldrums. Without a club in any of the top four levels, matches were confined to the regional league, and to add insult to injury, Estadio Alfonso Murube fell into disrepair. Such was the state of the stadium, that when the next bright young thing appeared on the scene, Asociación Deportivo Cueta in 1996, they had to play their matches at Campo José Benoliel, a basic ground of a few steps of terrace and a dirt pitch.
﻿Estadio Alfonso Murube was essentially rebuilt during 1997 and on 8 October that year, it reopened with a league match against AD Ceuta’s rival from across the Straits of Gibraltar, Algeciras CF, which the home side won 4-2. It proved to be a lucky ground, with the club gaining promotion to the Segunda B at the end of the season. And for the 14 seasons, that remained AD Ceuta's home, reaching the play-offs on five occasions, but never progressing further. Looking around the peninsula, you appreciate that open space is at a premium, and that is very apparent when walking around the stadium. Shoehorned between housing and offices, the pitch is 4 metres higher than the street on the north & east sides, meaning that it is only possible to accommodate a thin strip of seating on the east side. The stands at either end of the pitch are very similar, both slightly cranked with their front rows about 8 feet above pitch level. The southern stand is marginally bigger, and as is the case in Merida and Almendralejo, these ends house most of the seating.
The main stand is a curious, squat affair, with 5 rows of seats running the length of the pitch and a canopy/roof projecting from the club offices over the middle section. Overall the ground is bright, modern and makes the most of its cramped surroundings. The Spanish U-21 & U-19 teams have graced the stadium and there have been some memorable nights in the Copa del Rey, none more so than when Barcelona visited in January 2001 and over 7,000 spectators crowded into the stadium.
AD Ceuta was demoted to the Tercera at the end of the 2011-12 season for failing to meet their players outstanding wages. Worse was to follow when on the eve of the start of the Tercera season, AD Ceuta withdrew from the competition, prompting rumours of a potential merger with Club Atlético Ceuta, who themselves had gained promotion back to the Tercera for the 2012-13 season. An artificial pitch was installed during the close season and the fading blue seats were removed and replaced, only in part, with black & white seats. Most of the both end terraces remain devoid of any seating. CA Ceuta then changed their name to Agrupación Deportiva Ceuta Fútbol Club at the start of the 2013-14 season. These new surroundings that seem to suit the new AD Ceuta just fine, as they push to replace their predecessors in Segunda B. 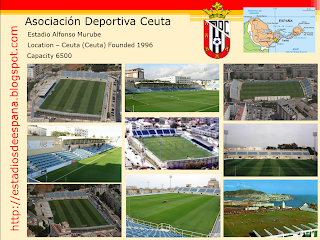 Labels: North Africa, Tercera or Below