I’ve been collecting photos of Spanish stadiums for well over a decade and every so often a team wins promotion to one of the higher leagues and it proves very difficult to find decent images of their stadium. Yeclano’s La Constitución is one such ground. As a result, this ramshackle enclosure in the north of the Region of Murcia has become one of my favourites. Not because of its looks or architecture, no it’s very basic; it’s quite simply been bloody difficult to find any quality pictures, so when I do stumble over a new image of La  La Constitución, well, I enjoy it all the more.

La Constitución was not the first ground in Yecla, that was a field used by a team called Hispania opposite the current railway station. Hispana bit the dust in the early thirties and the ground followed soon after. After the Civil War, CD Yeclano was formed and in 1943, land was acquired at the end of Calle Cruz de Piedra. The Municipality had the aim of developing a sports city, which in addition to the football field was to have included tennis and basketball courts. As a result the ground was named Campo de Deportes and was inaugurated on 16 April 1944 with a match against the Spanish Champions, Valencia, in front of 2,000 spectators.
CD Yeclano folded at the end of the 1940’s, but in 1950 CD Hispania Yecla was formed and competed in the Murcian Regional Leagues until winning promotion to the Tercera for the 1965-66 season. The club was now known as Yeclano CF, but their stay in the Tercera was short, lasting just two seasons. The club made a brief return to the Tercera in the mid 1970’s and again at the end of the 1979-80 season. This time however, there was an air of permanence about their stay, ten years in fact, and when they did leave the Tercera, it was as champions and in an upward direction to Segunda B.
﻿Yeclano finished fifteenth at the end of its debut season in Segunda 2b, but in the following season, 1991-92, it finished third and qualified for the play-offs. Their group comprised of Atletico Marbella, ADC Manlleu and CD Endesa As Pontes. The series went to the final match, with Yeclano needing a victory over Marbella to win promotion to La Segunda. A 0-0 draw at La Constitución saw the Andalucians promoted at Yeclano’s expense. Yeclano remained in Segunda B for another nine seasons, with mostly mid-table finishes. Then at the end of the 1999-2000 season, the club was relegated to the Tercera
The club spent the next three seasons trying to get out of the Tercera, failing in the 2001 & 2002 play-offs, before finally overcoming challenges from Villafranca, Levante B & Sant Andreu to win promotion. Their return to Segunda B in 2003-04 however was a far from happy, with off-field financial problems casting a shadow over the poor form on the pitch. In the end, Yeclano finished nineteenth and was relegated back to the Tercera. As the debts were still outstanding, the Spanish Federation imposed a further demotion, which was to prove the death knell and the club was wound up in the summer of 2004.
Almost immediately, Yeclano Deportivo was formed and took its place in the Murcian second division. This was won at the end of its first season and the following 2005-06 season, the club finished second in the Preferente and won promotion to the Tercera. Steady progress culminated in a second place finish last year and play-off victories followed over CF Trival Valderad, UD Playas de Jandia & finally Haro Deportivo. The 2010-11 season has proved difficult and the club has just been relegated back to the Tercera.
For all the personal charm I see in La Constitución, there is no avoiding the fact that it is very basic and at risk of falling apart at the seams. The 4,000 capacity is made up of mostly of benches come steps, although 350 seats are housed under the south cover. This cover of corrugated iron extends around to the west end. Apart from a couple of steps and a portakabin on stilts, the north side of the ground has little going for it and even fewer photographs in circulation. Finally, the eastern end houses the changing facilities, on top of which sits the popular terrace. With Yecla's growing population, one wonders if La Constitución will go the way of other older grounds and make way for housing. That way the club may get a new ground and a new beginning and even looking through my rose tinted spectacles, that can’t be a bad thing. 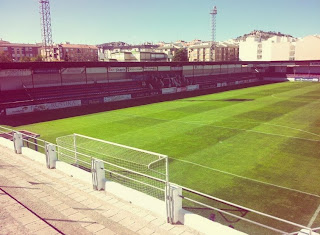 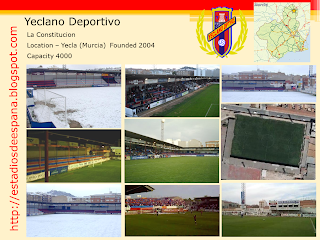 Labels: Murcia, New to Segunda B, Tercera or Below