It was Real Murcia's surprise promotion to La Primera in 2003 that highlighted the inadequacies of the old Estadio de la Condomina. The Municipality had purchased the stadium for a knock down 40 million euros in 1995, but had not touched a thing in the intervening years. Playing in one of the most illustrious leagues in the world in front of just 12,000 spectators, with nothing to show but gate receipts, drove home the point that the city needed a new stadium. Despite Real Murcia's now regulatory season long stay in La Primera, the city pressed on with its plans, but many eyebrows were raised when a site close to the small village of Churra, some 5 miles to the north of Murcia, was chosen.
Work commenced on the stadium in the spring of 2005, but despite much of the structure being prefabricated, the build soon fell behind schedule, as work appeared to focus on the shopping mall that was also part of the development. In September 2005, the municipality submitted an unsuccessful bid for the stadium to host the final of the 2008 Europa League. As the original deadline for inauguration of May 2006 passed and it soon became apparent that Real Murcia would have to start the 2006-07 season at La Condomina. The municipality had made a commitment to the Spanish National side to host an international in September 2006 and whilst work had progressed significantly during the summer, this date was also missed. In the end, it was Spain's international friendly with Argentina on 11 October 2006 that opened the stadium. However, such was the rush to complete the build, the playing surface did not have time to settle and strips of turf came away as the match progressed. In order to allow the pitch to recover, Real Murcia's debut at the stadium was postponed until 26 November 2006. Unfortunately, Real Valladolid did not read the script and turned over the locals by 4 goals to one.
Since being relegated from La Primera at the end of the 2003-04 season, Real Murcia had soon little inclination towards a quick return. Two mid-table finishes in the succeeding seasons were followed by a steady start to the 2006-07 season. There was a dip in form around the time of the move to the Nueva Condomina, but regular wins both home and away saw the club secure third place and promotion back to La Primera. The 07-08 season practically replicated every one of Real Murcia's previous visits to the top flight, in that it was dire. Just seven wins and a total of 30 points saw Los Pimentoneros finish nineteenth and be relegated back to La Segunda. Worse was to follow as the club dropped to Segunda 2b for the first time in a decade at the end of the 09-10 season. Luckily, the club showed some resilience, winning Group IV at a canter and beating Lugo in the play-off final to earn a place back in La Segunda.

Architect Jaime López Amor's beautiful, yet simple design rivals Espanyol's Estadi Cornellà-El Prat is one of the best stadiums to have been built in Spain over the last 20 years. It came at a cost of 51 million euros and one could quite convincingly argue that a club of Real Murcia's standing and support does not warrant such an expensive stage. However, the stadium is an integral part of the larger and commercially successful retail park that bears the same name. Whilst its design is not exactly revolutionary, it's essentially a single oval tier with mid-level access, it is the quality and panache that win you over. Helped by liberal use of red & white, always a winner when designing a stadium, the internal symmetry is only broken by a slender line of executive seating and media booths high in the main west stand. All supports on the stair wells and access ramps are chrome and every facings is finished in red or white, leaving you in no doubt about the colours of the resident club. Outside, the white oversized roof appears to hover above the upper tier, thanks to the use of ultra slim cantilevered supports.

The Estadio Nueva Condomina is a gem and has already hosted three sell-out matches for La Selección, all resulting in victories for the home side. Sure, it is under-utilised with Real Murcia becalmed in La Segunda, but the club would attract crowds of 20,000+ should they return to La Primera. And who knows what level the crowds could reach if they could actually stay in the top flight? 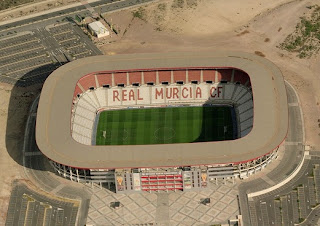 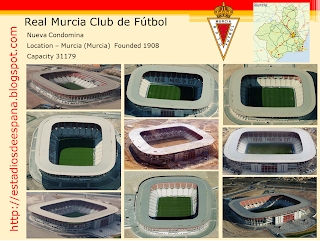 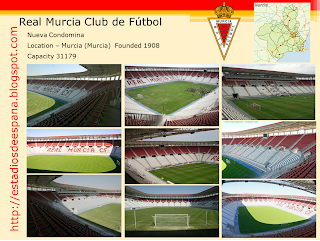