Many people questioned the wisdom of RCD Espanyol when they revealed that their new stadium would be built on a strip of industrial wasteland by the banks of the Rio Llogbregat in the satellite town of Cornellà-El Prat. It was off the beaten track and well away from their traditional heartland. Well talk about turning a sows ear into a silk purse, the Estadi Cornellà-El Prat is one of, if not the best stadium to have been built in Spain since the late 1950's.
Back to 2002, the club had purchased the land for 360,000 euros  and set about the torturous process of building a football stadium. Four years of relocation, redevelopment and negotiations between the club, municipality and Catalan Government took place before the first foundations were laid in November 2006. Reid Fenwick & Gasulla Arquitectura won the international competition to design the stadium and over the next two and a half years, the fans waited patiently as the stadium started to take shape. The waiting was helped by Espanyol's excellent form on the pitch, particularly in Europe, where they reached the final of the Uefa Cup, only to lose on penalties to Sevilla.
On 13 July 2009 the club took the "keys" to their new stadium and set about moving in and six days later, a load test was conducted when a team of Espanyol veterans played local club side Cornellà in the first unofficial match. The first official match took place on 2 August 2009, when Liverpool were beaten 3-0 with Luis Garcia having the honour of scoring the first goal. A timeline of events can be found here on the club's official website.
The interior is made up of two tier holding 40,000 blue and white seats, but like Arsenal's Emirates Stadium, it is the little touches that make it so special. Sandwiched between the tiers is the corporate area, consisting of 36 executive boxes and a 270 seat President's Club. The Hoi Polloi are also well catered for with  concourse areas that have 27 bars, a club museum and shopping outlets. The building also houses office rental space and has a 540 square metre warehouse under the pitch. The principal stakeholder in the build was the LAR Company, who funded 40 million of the total 60 million euro cost, and run the mall opposite the stadium.

The roof seems to float over the four sides of the ground, but curiously does not cover the upper corners of the stadium. It also includes solar panels that provide electricity and hot water to the arena, with any surplus being redirected to the local grid, raising an estimated 600,000 euros per annum. Around the stadium is a circular perimeter wall, inset with perspex panels that light up in the club colours on match days. So impressive is the stadium that it won the prestigious 2010 Business Award Stadium of the Year, beating off challenges from the new Dallas Cowboys Stadium and Dublin's Aviva Stadium.
As you walk around the stadium, you come to Gate 21, which is dedicated to former club captain Dani Jarque. He played in that inaugural match against Liverpool, but a few days later, at a training camp in Italy, he collapsed and died. Eleven months after his death, childhood friend and Barca midfielder Andrés Iniesta dedicated his World Cup winning goal to Jarque. On the eve of the Barcelona Derby in December 2010, Iniesta presented the famous t-shirt that he revealed when scoring, to the club to include in a mural that honours the memory of Jarque.
Is it Estadi Cornellà-El Prat, Estadi RCD Espanyol or Nou Sarrià? The club side-stepped naming the stadium after Jarque despite calls from socios, and continued to explore naming rights. The club finally agreed a 7 year deal with Power8, a gaming technology firm, in June 2014. Not exactly catchy, and not well received by the fans. However, whatever they call home, there is no denying the fact that it is a magnificent stadium. And not even the most hardened fan of Barcelona, their closest and oldest rivals, would not begrudged them. 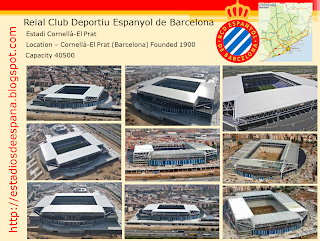 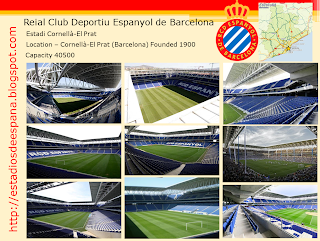