The Estadio Municipal Torres de Cotilla is officially the current home ground of Real Murcia B or Real Murcia Imperia as they have been known in recent seasons. I say official as they are prone to moving around a bit, as the montage shows three grounds namely Estadio Municipal Torres de Cotilla, Estadio Santiago el Mayor and Estadio José Barnés. They have also played bigger matches, such as play-offs and against Murcian rivals at the old & new versions of the Condomina, and just to add to the confusion, appear to have recently moved again.
Imperia can trace its roots back to the formation of Recreativo Levante de Murcia in 1920. Two years later, Recreativo split and one of the parties formed Imperial Football Club. The club played a few seasons in the Tercera prior to the Civil War, then following the end of the conflict and the expansion of La Segunda, Imperia was invited to join Group IV, which also featured Real Murcia. They finished bottom of the league and dropped to the regional leagues. In 1944 the club formed an affiliation with Real Murcia whereby the regions senior team would get first pick of any promising players. Over the next 60 or so seasons, Imperia became pretty much a permanent fixture in the Tercera, apart from a nine year spell in the regional leagues during the 1970's. During this period, the club became the official reserve team of Real Murcia. Changes by the Spanish Federation to the set-up of reserve team football, saw Imperia disbanded and Real Murcia Club de Fútbol S.A.D. “B” set up as  a fully professional unit within Real Murcia in 1993.

The club won its first Tercera title in 2006-07 and a year later won promotion to Segunda B following a third place finish in the league and play-off victories over Puerto Real & Tudelano. There followed two seasons of impressive form that saw the now renamed Real Murcia Imperia  finish fifth and thirteenth respectively. Unfortunately the 2009-10 season was played against a background of turmoil within the parent club, which resulted in their relegation to Segunda B. As a result of Real Murcia's relegation, Imperia was demoted to the Tercera. They finished in second place during the regular season, but lost out to Almansa in the play-offs.
In recent seasons, Imperia have moved the location of its home matches so often, that it is very difficult to find out where they are playing. With the club up to its neck in debt and with no suitable training facility or Ciudad Deportiva, Imperia has led a nomadic existence around some of the municipalities less salubrious facilities. For example, the rather useless club website makes no mention of where their home matches take place, but they appear to have started this season at  Estadio Municipal Torres de Cotilla and then move to 12 miles north west to Campo de Fútbol Miguel Indurain in Ceuti. Who knows where they will play next season? 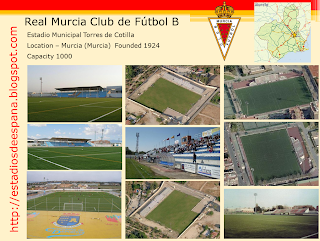