RCD Espanyol has a long history of developing local players that ultimately reach the first team or go on to play for other Catalan clubs. Prior to 1994, this was achieved through agreements with local clubs affiliated to Espanyol, rather  than a specific reserve side, who would then grant first refusal  on a talented player. In 1990 the existing arrangement with Centro de Deportes Hospitalet broke down and led to Espanyol reviewing the process of developing players. In August 1990 they signed a collaboration agreement with  F.C. Cristinenc, a team from Santa Cristina d’Aro on the Costa Brava, that had debuted in the Tercera in 1989. A year later, full affiliation was agreed and the club changed its name to F.C. Cristinenc-Español, but continued to play in Santa Cristina d’Aro.
In 1994 the final transformation took place when the club moved to Barcelona and Estadi de Sarrià, and changed it's name to Real Club Deportivo Español B. Under the guidance of Paco Flores the 1994-95 season was a great success with the Tercera title won with only 2 defeats and Pinoso CF, Águilas CF &  CF Sóller beaten in the play offs. In the summer of 1995, the club Catalanised its name and the reserves became known as Real C.D. Espanyol de Barcelona B.
There is an inevitable element of inconsistency that goes with running a reserve side, young players get drafted into the first team and even younger ones replace them. So it should come as no surprise that this team has had it stays in Segunda 2b punctuated by drops back into the Tercera. That's not to say that at times they have performed well in the third tier and on three occasions they have made the play-offs to La Segunda, but have failed to progress.
After Sarrià closed in 1997, the club used a few grounds in the Barcelona area. For the 1997-98 season they played at Estadi La Caixa then moved to Parc del Migdia for three years until 2001. Play-off games were switched to Montjuic. In 2001 the club opened its Ciutat Esportiva at Sant Adrià del Besòs in the south east of the city. The main pitch features a cantilevered stand on the west side and open seating on the east side. Four other pitches are used for first team and reserve team training and Espanyol's women's side play here as well. The site also has a club shop and some offices, essential given that the main club offices are 20 miles across town at Cornellà - el Prat in the new stadium. 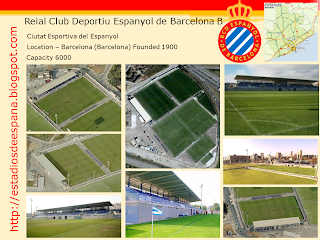 Labels: 2BG3, Barcelona, Catalunya, New to Segunda B, Segunda 2B