Inaugurated in 1913, El Rubial is the second oldest football stadium in Spain after Gijon's El Molinon. As you would expect for a stadium of such an age, many of the games greats have graced its turf. Zamora, Di Stefano, Kubala, Kempes, Bebeto and Torres have all played at El Rubial. Unfortunately most of these appearances have been in friendlies. Águilas Club de Fútbol was the resident club for the majority of its history, but they never played above Segunda B. In fact they only managed 7 seasons at this level and spent over half their existence in the  regional leagues.
The first official match recorded at El Rubial was on 19 January 1913 when Sporting Club, a team of English ex-pats working in the local mining industry, played Sociedad Levantina. There are however, anecdotal accounts of matches being played on this field as early as 1908, the year El Molinon opened. The field was directly behind the local power station and was the property of John Gray, the English owner of the electric company. In the deeds for the ground, he stated that it should be used for playing football and not for any other purpose. This stipulation continued when the ground was passed over to the local municipality in 1987.
As for Águilas CF, well the pinnacle of their footballing history occurred in season 2005-06, when after a 5 year absence, they returned to Segunda B and finished second in the league. This was only their third season at this level, but hopes were high after such an impressive campaign. In the play-offs they were paired with Alicante CF and although they lost the first leg in Alicante 1-2, the team was confident of progress. A 0-0 scoreline dashed their hopes and it was back to Segunda B football for the 2006-07 season. That was about as good as it got for Aguilas CF and after finishing the 2009-10 season in last place and with debts in excess of 400,000 euros, the club folded.
A new club, Club Deportivo Águilas Futbol Club now use the ground for their matches and currently sit near the top of Group XIII of the Tercera. El Rubial is a simple enclosure, that's a hefty goal kick away from the town's Poniente beach. It has a main stand and changing block on its north side that dates from 1954 and was opened with a friendly against Real Madrid. To build the stand, the ground had to be extended, and this land was donated to the club by the owner of a farm from which El Rubial takes its name. Opposite is a narrow terrace of four steps, which disappears at the halfway line to allow space for the dugouts. Behind each goal is an area hard standing. The Power station has long since disappeared, replaced by modern housing and one is left wondering if John Gray's insistence that the ground be used solely for football was the ultimately the  downfall of Águilas CF. With no land to sell, the club was backed into a corner when the debts accrued. Here's hoping that CD Águilas FC have a more realistic set of ambitions. 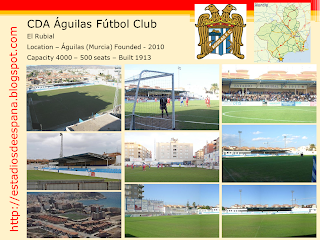