It’s was a sort of unrequited rivalry, that between Alicante Club de Futbol and Hércules CF. Whilst the team that bears the city’s name sits in the shadow of its bigger and more successful neighbour, Hércules’ attention if firmly fixed 12 miles down the road on their historic adversary, Elche CF, and it was ever thus. Formed in 1918,  Alicante CF competed in regional leagues including matches against teams from nearby Murcia, and were still at this level when the national structure was created in 1928. Back then, the criteria for joining the Tercera was somewhat arbitrary, but Alicante CF was invited to join the league in 1931. This coincided with a change of location, as having played their matches at the Campo la Pla, the club moved to the recently vacated Campo de La Vina, following Hércules move to Campo de Bardin. They also changed from their original red shirts and blue shorts, to a bright blue and white combo.
For the next few years, Alicante was somewhat messed about by the constant restructuring of the Tercera division, and despite a third place finish in 1931-32 and winning their section in 1933-34, they spent the following seasons back in the regional league. After the Civil War, Alicante received an invitation to play in the second division, finish third and you guessed it, the league was restructured and back they went to the regional league. An ill fated merger with Hércules followed in 1941, but this lasted less than a year and Alicante emerged from the debacle as Lucentum FC. They returned to plain Alicante CF in 1943, when Hércules dropped “Alicante” from their official name. The rest of the 1940’s were spent playing in the Tercera, and then in 1951, the club won promotion to La Segunda. The season long stay saw matches played at Campo de Bardin, before returning to La Vina, when relegated back to the Tercera for the 1952-53 season. This arrangement was repeated when the club spent back to back seasons in La Segunda from 1956-58. You can read about La Vina, Campo de Bardin and José Rico Pérez here.﻿
In 1961, Hércules left Campo de Bardin for a newly revamped Campo de la Vina, and due to their severe economic problems, Alicante had little option but to become the reserve side for Hércules. This continued for the next 8 seasons, before the club regained its independence in 1969, but by now its back in the regional league. The local council agreed to develop a new ground in the northern suburb of Villafranqueza, and the club moved to this basic enclosure in 1974. Alicante returned to the Tercera in 1979, but it took a further 12 seasons to reach Segunda B, when they overcame Lorca CF, CE Europa and Villafranca CF in the play-offs. Despite being just over a decade since its last make-over, their Villafranqueza ground was not suitable to use at this higher level. The council were unwilling to renovate Villafranqueza and suggested that Alicante use Estadio Jose Rico Perez, which they now owned. So back in Hércules back-yard and in direct competition with them, Alicante equipped itself extremely well. They actually finished higher than their rivals in 2002-03 and 2003-04. Hércules gained promotion to La Segunda via the play-offs in 2004-05, and so began three seasons of play-off agony for Alicante, losing to Lorca Deportiva CF in 2005, then SD Ponferradina and Racing Ferrol in successive finals.
A second place finish in 2007-08 saw the club reach the play-offs again, where UD Fuerteventura were comfortably dispatched, before SD Ponferradina was beaten 3-0 on aggregate to seal a return to La Segunda after a 50 year absence. The league had changed immensely since their last appearance and survival in the second division was always going to be tough, which was not helped by appalling home form, which saw just 2 victories in 21 matches at José Rico Pérez. Six victories away from home, including a particularly sweet 2-1 win “at” Hércules, kept them in touch with survival for much of the season, but in the end they were relegated in twentieth place with 35 points. Back in the Segunda B and facing mounting debts from their jaunt at the national level, there was one silver-lined cloud on the horizon. The council had finally renovated Villafrenqueza and the club could move away from the cavernous José Rico Pérez  and use a ground that didn’t swallow up the support. Regrettably, with players debts still outstanding, the Spanish Federation relegated Alicante to the Tercera in July 2011. With budgets slashed, life in the Tercera was always going to be tough, and in May 2012 Alicante dropped even further, to the Regional Preferente.
Villafranqueza is destined to remain very basic, with open banks of seats and no covered stands, but its home and the community role it plays seemed to suit the Alicante much better than trying to slug it out with Hércules. However, it was the debts the club accrued during their season-long stay in La Segunda that finally did for them, with Alicante CF folding in May 2014. 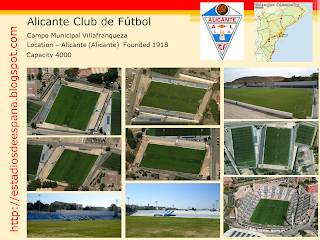