Spain experienced a mini boom in stadium design & build for a decade from the mid-nineties and the municipality of Ponferrada joined in the fun in 1999, when they decided to build a sports complex a mile or so north of the town centre. The development at El Toralin featured an indoor sports centre, swimming pool, tennis & squash courts, athletics stadium and an 8,200 capacity football ground. The new development was similar in design to CF Numancia’s new stadium that had been completed a year earlier and offered SD Ponferradina the opportunity to move closer to the centre of town (the journey to Fuentesnuevas was a bit of a jaunt for the faithful). The club played their first match at El Toralin on 8 September 2000, a 0-2 friendly defeat to Celta Vigo, and the move kick-started the most successful period in the club’s history.
Relegation had just been avoided in the final season at Fuentesnuevas, so the club ensured that El Toralin would host Segunda B football for the 2000-01 season. Eleventh place was secured at the end of the season and over the next few years the club made steady progress until it won the league title in 2004-05. As regular readers of this blog and students of all things Futbol will know, first place in Segunda 2b doesn’t mean automatic promotion and in the play-offs, Ponferradina fell short, losing to 2-1 on aggregate to Real SD Alcala.
A year later the club was back in the play-offs thanks to a fourth place finish in the league and this time there would be no slip-ups. Universidad de Las Palmas were beaten at the semi-final stage, before Alicante CF were beaten 2-1 on aggregate with Fran scoring the decisive goal five minutes from the end of the second match. With the club due to start its first ever season in La Segunda, a few minor enhancements were made to the press and corporate facilities at El Toralin. The 2006-07 season would prove to be a hard slog on the pitch and whilst Ponferradina did not disgrace themselves, they spent practically all the season in the bottom four and were relegated in twentieth position and a final total of 46 points. Back in Segunda B, further titles were won in 2007-08 and 2009-10. The latter resulting in a play-off victory against UE Sant Andreu and promotion back to La Segunda for the 2010-11 season. The stay in the second tier was a short one however and a season long struggle resulted in just five victories. Their total of 34 points saw Ponferradina finish just one place off the bottom of the table.
Now we know by now that Ponferradina can handle Segunda B, and so it proved to be the case  during the 2011-12 season, with the club vying with Real Madrid Castilla for top spot, before settling for runners-up position and the long route through the play-offs. Here they overcame the challenges of Real Jaén, Lucena and most impressively, CD Tenerife. Back in La Segunda and Ponferradina has acquitted itself rather well. None of the hanging around the relegation zone this term. No, the club recorded its best ever finish of seventh, just missing out on the end of season play-offs
El Toralin is bright and functional and unlike a lot of modern stadiums, it does have a streak of individuality. I particularly like the way spectators enter the stadium via sets rounded steps positioned on each corner of the ground. These entrances open out onto raised viewing galleries in the corners between the the single banks of blue and white seats. A nice touch, where so many other stadia of a similar design incorporate a bare wall. Yes it has style, but more important is the fact that it is yet another great example of the municipality investing in the well-being of its population and the local football club. 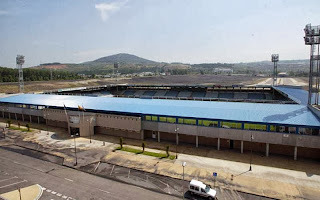 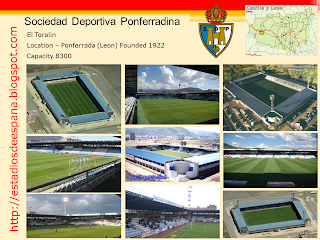