The Basque region seems to be very adept at producing little clubs who are able to defy the odds and punch well above their weight. In recent years Amurrio played the role and before them Gernika and Beasain bloodied a few noses. Also, let's not forget the daddy of the little-Basque clubs, SD Eibar, who from the late 1980's, played in La Segunda for the better part of twenty years. SD Lemona was another one of these clubs, but unlike Amurrio, Gernika et el, they maintained their place in Segunda B, playing over 20 seasons at this level.
Formed in 1923, Lemona played in Lemoa, a village of 3,000 inhabitants in the mountains to the south east of Bilbao. Their one and only home was Arlonagusia, a simple enclosure with a fantastically preserved main stand. Over the years the club received huge support from the Cemontos Lemona, a large local cement manufacturer, which goes some way to explaining their continued presence in Segunda B. Since their return to the third tier in 2004, Lemona was remarkably consistent with top ten finishes in the last seven seasons, but no appearances in the end of season play-offs. In fact they have only ever qualified once for the play-offs to La Segunda, back in 1996-97. A fourth place in the league saw Lemona enter a play-off group featuring Xerez, Sporting Gijon B & UD Gramanet, but it was not to be their year, as Lemona finished bottom of the group with just a solitary point from their six games.
Lemona undoubtedly found its niche and was comfortable playing the likes of Eibar and Deportivo Alaves, their bigger Basque neighbours. However, time caught up with them in 2011-12, when newly promoted near-neighbours SD Amorebieta, took on the mantle of little-big Basque club, and Lemona endured a season-long struggle that culminated in relegation. Also spare a thought for their exploits in the Copa de RFEF. Lemona reached the final and won the second leg against Binnisalem 6-1... but lost on away goals. When your lucks down, it's really down! It would seem however that these men of cement ultimately had feet of clay, and with debts mounting and demotion to the Regional Preferente confirmed by the RFEF, the end was called on 7 July 2012. 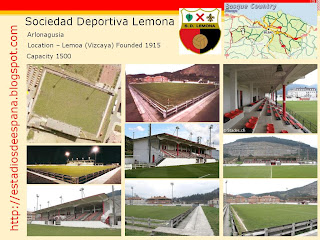