Football has been played on Urritxe since 1915, ten full years before Sociedad Deportiva Amorebieta was formed. It was a basic facility with no stands and a dirt pitch to the north east of the town, and it stayed pretty much unchanged until the turn of the century.
In 2000, Amorebieta moved out to allow the complete redevelopment of the site. They didn't have to move far, just 200 metres to the east where the municipality had built Campo de Fútbol de Txolon, a small enclosure with an artificial pitch. Meanwhile, Urritxe was getting its first stand, a raised structure with four barrelled vaults that were cantilevered over 500 seats. The rest of the ground was made up of hard standing and was opened in time for the club to start the 2002-03 season. Urritxe was officially inaugurated on 12 October 2002 when Racing Santander played Athletic Bilbao in a friendly. Underneath the main stand is a collection of changing facilities, a few shops and a bar. Not bad for a combined cost of € 1,320,000.
As for the club, they kicked around in the regional leagues for the first thirty five years and during the late 1940's Spanish International goalkeeper and local boy Carmelo Cedrún, started his career with the club. They reached the Tercera for the first time in 1962-63 and whilst they returned to the regional leagues throughout the 1970's, they have been ever present in Group Four of the Tercera since 1981. Amorebieta has qualified for the end of season play-offs on 8 occasions, with failures in the seven attempts up until 2011. The 2010-11 season was different as the club secured their first Tercera title, then beat CD Manacor 4-0 over two legs to earn a place in Segunda B for the first time.
The upward momentum continued as Amorebieta made a flying start to the 2011-12 season. Strong form at Urritxe and a tight defence saw the club finish fourth and enter the end of season play-offs. Unfortunately, their hoodoo in the the play-offs returned and as they lost 1-3 to Real Balompédica Linense. Amorebieta has continued to impress with a sixth place finish in 12-13 and a respectable tenth place a year later. 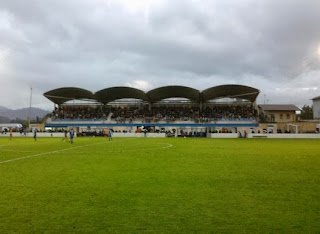 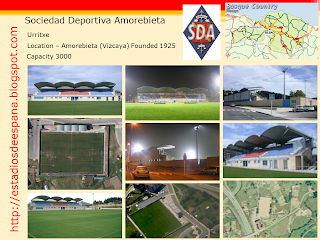