Club Esportiu Manacor has just won the Group 11 Tercera title, the fourth time that it has won the league at this level. A stalwart of the Tercera, the current team has also repeated the success of their mid eighties and early nineties counterparts, by winning promotion to Segunda B. The club made the third tier three times during that period, but given that short timescale, you would have fathomed that their stays at this level were not particularly long.
CE Manacor's post season route was tortuous, featuring defeats home and away to SD Amorebieta, a 2-1 aggregate win over UD Mutilvera and an away goal victory against UD Almansa. So 17 years after their last appearance in Segunda B, and just 12 months after winning the regional title, CE Manacor were back in the third tier. The 2011-12 season proved to be one of contrasting fortunes for the club's from the Balearics. Whilst Atletico Baleares and Mallorca B pushed for promotion from Segunda B, Sporting Mahones folded at the halfway stage. At least that fate did not befall CE Manacor, however the season proved problematic on the pitch and the club was relegated back to the Tercera after a one season sojourn.
Na Capallera is a simple municipal ground, comprising of two stands. There is a basic covered terrace on the west side that dates from the 1970's. It's corrugated iron roof is held up by thin props at the front of the terrace it covers. Opposite on the east side is the raised uncovered tribuna which is the newest part of the ground having been built in 2009. This holds around 1200 on bench-like seats, This new build also hold the changing facilities and other offices.Thin strips of terrace can be found behind each goal. 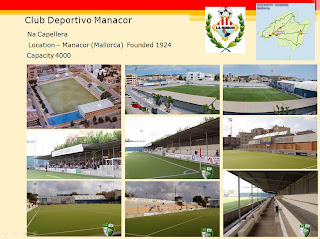