Football had been played in the University town of Alcalá de Henares for 25 years, when on 1 May 1929  Alcalá Foot-ball Club and Deportiva Obrera Alcalaina merged to form Sociedad Deportiva Alcalá. The "Real" prefix followed in the December of that year when royal patronage was granted. From the outset the club played its home games at the Campo Virgen de El Val which also went by the name of Campo del Humilladero. RSD Alcalá began competing in the regional championship in 1933 and with the exception of a few season long visits to the Tercera, that was pretty much it until the early 1960's. Then from 1960, RSD Alcalá returned to the Tercera, and there they stayed for the remainder of the decade.

The club decided to sell the El Humilladero in 1967 and land was purchased at Pilar del Campo Clemente for 9,800 pesetas. They carried on using the old ground whilst meanwhile, the municipality started to develop a sports centre to the south east of the town on the north bank of the Rio Henares. Quite what happened in the intervening six years to the the land at Pilar Campo del Clemente is a mystery, but the club struck a deal with the municipality and the Estadio Municipal El Val opened its doors for the first time on 14 August 1973.
By now, RSD Alcalá were back in the regional leagues, but a runners-up berth behind CD Leganés in 1976-77 secured promotion back to the Tercera and three seasons later, the Tercera title earned promotion to Segunda B for the first time. Eleven of the next thirteen seasons would be spent in Segunda B, but to be perfectly frank, RSD Alcalá achieved little of note, their best finishes coming in 83-84 & 88-89 with seventh place. After relegation from Segunda B in 92-93, the club spent the rest of the nineties in the Tercera and regional leagues, but won promotion in 2000-01 despite only finishing fifth in the league. Real Madrid C occupied the spot above them, but were unable to ascend due to Real Madrid Castilla already playing in Segunda B.
This past decade has had a familiar feel to it, several seasons of mediocre finishes in Segunda B, interspersed with a couple of seasons in the Tercera. There was one notable high point however, when the club finished fourth in Segunda B in 2004-05. Their highest ever finish earned a place in the end of season play-offs and after drawing 1-1 at home with SD Ponferradina, RSD Alcalá went to El Toralin and won 1-0. In the final, the club was paired with  Hércules CF, but was overwhelmed by three goals to one at El Val to extinguish any hope of promotion to La Segunda. Since then, the club has ploughed the same furrow, with a couple of Tercera titles and some more mid-table finishes in Segunda B.
The Estadio Municipal El Val is typical of its age. Terracing come concrete benches make up three of the sides of the ground, which has been painted in the club colours of red and white. The end terraces are curved and meet up with more bench seating on the north side. The monotony is broken up by a short cantilevered stand on the halfway line, underneath which sit red and white bucket seats. El Val holds around 7,000 spectators (The architect never specified a maximum capacity!) and due to the close proximity of Madrid and La Selección's head quarters, it has hosted a number of junior internationals. Unfortunately when the England U-21 team played their in 2004, some knuckle-dragging boneheads subjected Glen Johnson, Carlton Cole & Darren Bent to racist chants. Regrettably, both El Val and some locals seem to be stuck in the 1970's. 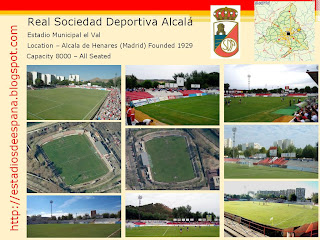