Up until a few years back, Club Deportivo Leganés had their own private battles in the south of Madrid with local rivals Getafe CF. The majority were carried out in the lower reaches of the Spanish league, but some were in La Segunda, and you could argue that Leganés was top dog. All that changed at the end of the 2003-04 season when Getafe won promotion to La Primera and Leganés dropped to Segunda B.
The past decade must have been difficult for Leganés and its followers.Watching as the club stagnates in the third tier whilst their rivals and neighbours have reached two cup finals, played in Europe and attracted overseas investment. They are the older of the two clubs, having been founded in 1928, but the first fifty seasons were spent in relative obscurity, with just nine seasons in spent in the Tercera during the 1950's & 60's. After starting out at the Campo de Tiro, the club moved to the Campo de Estación in 1929 and remained their until 1966, when they moved to Campo Luis Rodríguez de Miguel. This basic enclosure had a capacity of 5,000 all contained on open terracing, with a tiny cover on the north west side. It was here in the mid-seventies that the club began to build its reputation, returning to the Tercera in for the 1977-78 season. Over the next decade, Leganés steadily improved its results, winning the Tercera title in 1985-86, but losing out to CD Lugo in the play-offs. A year later and a third place finish was good enough to earn a place in the newly extended Segunda B.
Leganés made a steady start to life in Segunda B, gradually improving season by season, until they won Group I of Segunda B in 1992-93. In a tough play-off group, Leganés faced Elche CF, CF Palencia & Xerez CD. An unbeaten record saw the club win the group and promotion to the second division. Over the next eleven seasons, Leganés played their football in La Segunda, finishing as high as eighth in 1995-96 & 96-97. On the back of these impressive final placings, the club and the municipality decided to build a new stadium to the north of the town. The Campo Luis Rodríguez de Miguel saw its last competitive match on 1 February 1998 when   Leganés lost 1-2 to CD Ourense, thanks to a last minute goal by former Manchester United player Mark Robins. The site of the stadium is now occupied by the town's new Plaza Mayor and plush modern apartments.
On 14 February 1998, Leganés entertained Xerez CD in the first match at the new Estadio Municipal de Butarque. The match finished 1-1 and the club saw out the season with patchy home form, finally finishing in 13th position. In truth the move to the stadium had come a few seasons too late. Leganés had peaked and over the next six seasons it struggled to maintain its place in the second tier. In fact, the club earned a reprieve at the end of the 1992-93 season, despite finishing in the relegation zone. SD Compostela's demotion due to unpaid debts saw Leganés retain their place in La Segunda. There would be no reprieve a year later as the club dropped back to Segunda B. A decade in the doldrums finally ended in May 2014, when Leganés won promotion back to La Segunda.

It would be fair to say that the Estadio Municipal de Butarque has not seen the best of CD Leganés. Poor form in the second division has been followed by a lack of success in Segunda B. The stadium forms the centre piece of a sports development and is bright, but a little formulaic. That might sound harsh, but a year later the Andalucian town of Algeciras opened a carbon-copy of Butarque. Both stadiums feature a single tier of raised seating and a high cantilevered roof over one side of the ground. Butarque has the edge on capacity, with 8158 blue & white seats placed around the playing surface in an oval configuration. Smart, functional and bigger, but ask any Leganés fan of a certain age, and they will crave for the more personal Rodríguez de Miguel and the days when the club was top dog in the south of Madrid. 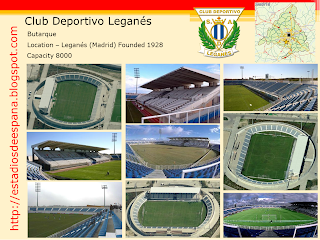