The Estadio José Zorrilla was home to Real Valladolid from 1940 to 1982 and so fond was the club and the municipality of the name, that they decided to call their new stadium Estadio Nuevo José Zorrilla, but just who was José Zorrilla? A former President of the club on an ego trip? A home-grown star player from years gone by? No, José Zorrilla was a poet and dramatist. He was a contemporary of Victor Hugo and most importantly, a son of Valladolid. What a nice touch and a million miles away from all the stadium naming rights nonsense that tarnishes today's new builds. Regrettably, rumours that Wantage Town FC has renamed their main stand in honour of Pam Ayres appear to be wide of the mark.
﻿﻿Real Valladolid Deportivo was  created following a friendly match in 1927, when the city's two strongest sides, Real Unión Deportiva de Valladolid and Club Deportivo Español joined forces to beat RCD Espanyol of Barcelona. Officially founded on 20 June 1928, the club played its first matches at Campo de la Sociedad Taurina in the shadow of the city's bull ring, Valladolid entered the Fase Segunda B, the precursor to the Tercera. They continued at this third level, winning a pair of titles in 1933 & 1934, before debuting in La Segunda in the 1934-35 season. La Segunda was made up of three regional groups and Valladolid finished second in Group I and entered the end of season play-offs. Here they were outclassed, losing nine of the ten matches, finishing bottom of the group. The club were to play two more full seasons at Taurina, either side of the Civil War, before decamping  a hundred yards westwards to the new Municipal stadium.
Opened on 3 November 1940﻿ with a 4-1 win over Arenas Getxo, the Campo Municipal (It wasn't named in honour of José Zorrilla until 1951) had an opening capacity of 10,000 and featured a covered three-quarter length stand on the west side. The complex cost 800,000 pesetas to construct and like many stadiums built in the years immediately following the Civil War, political prisoners were used to provide free labour. Valladolid hoped to use the new stadium as a springboard to La Primera and in 1942-43, it very nearly paid off. Under the guidence of Hungarian coach Károly Plattkó, Valladolid once again  finished second in Group I of La Segunda. An altogether more convincing performance followed in the play-off group, finishing third and and qualifying to play Granada CF in a final match for a place in the top division. The match was played in neutral Barcelona and Granada prevailed 2-0 to retain their place in La Primera. This was a turning point for Valladolid, Plattkó and many of the top players moved on and 12 months later, the club was relegated to the Tercera. ﻿﻿
Valladolid took three attempts to escape from the Tercera, but when they won promotion to La Segunda at the end of the 1946-47 season, their good form continued and the league title was comfortably won. The club remained in La Primera for the next decade, finishing as high as sixth in 1950-51. During this period, Valladolid also reached the final of La Copa del Rey, losing 1-4 to Athletic Bilbao. The stadium was also extended with an additional tier of terracing added, along with a marathon tower on the east side, raising the capacity to 18,000. At the end of the fifties and early sixties, Valladolid switched between the top two divisions on five occasions, before settling in La Segunda for the remainder of the decade. The club saw some action in the Tercera in 1970-71, but returned to La Segunda a year later. A cover was erected over the east side during the 1970's, which managed to obscure the marathon tower. Valladolid achieved a few top five finishes in La Segunda  before winning promotion back to La Primera in June 1980.

The Estadio José Zorrilla was coming to the end of it's useful life and with Spain being awarded the 1982 World Cup, the municipality decided to build a new stadium, as redeveloping the old stage was impractical. In that first season back at the top, the final full season at José Zorrilla, Valladolid finished twelfth. The last game of the 1980-81 season saw a record crowd of 22,000 attend the match with Real Madrid. The northern end of the stadium was extended with temporary stands and those present saw a dramatic end to the season. Take a look at this footage of the old stadium and Real Sociedad eventually winning the title at Sporting Gijon. The final match at Estadio José Zorrilla took place on 7 February 1982 when Valladolid beat Osasuna 2-0. The reserve team continued to play on the ground for a couple of seasons before it was finally demolished in 1984. The site is now occupied by a branch of El Corte Inglés department store. 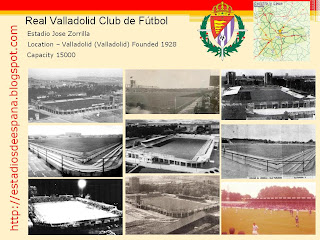