When Real Sociedad moved to Anoeta in 1993 the change in culture must have been immense.  It was not just a mile or so to the south of this beautiful coastal city, but a world away from the intense and claustrophobic surroundings of Atotxa. The Penas and Ultras that were used to standing less than five feet away from the goal-mouth action were now up to 50 metres away.

Work started on the construction of Anoeta in late 1990, on the site of the city’s old municipal athletics stadium, which had originally opened in 1950. The budget for the build was the equivalent of 21 million euros and the original specification had a capacity of 29,000 seats spread over two undulating tiers. It was inaugurated on 29 June 1993 with the staging of the European Junior Athletics Championships and saw its first football match, a friendly between Sociedad and Real Madrid, on 13 August 1993. The north and south ends of the ground were developed further in 1998 with the addition of a mezzanine tier between the existing two levels.
Results at home in that first season were actually better than the last season at Atotxa, but to be honest Sociedad were already a team in slow decline. Since moving to the new stadium, Sociedad has achieved just two podium finishes, third in 1997-98 and second in 2002-03. I absolutely accept that the decline cannot be wholly attributed to the move to Anoeta. Since the introduction of the Champions League and individually negotiated TV rights for teams in La Liga, it has become even harder for mid-ranking teams from smaller cities (185,000 inhabitants) to compete, but boy Atotxa did give them an advantage. Then in 2007, they were relegated for the first time in 40 years from La Primera and it took them 3 attempts to get back. Now in its third season back in the top flight, Real Sociedad play in front of an average home crowd of around 22,000, which is decent, but most of the atmosphere generated disappears into the ether.

Let’s talk about the stadium. Anoeta is a bit like a Prom Queen; Beautiful to behold, fabulous curves, but emotionally vapid. It’s shares a large part of its DNA with Roger Taillibert's iconic design for the Parc des Princes in Paris, and is in effect a smaller version of the Olympic Stadium in Seoul. I am sure it works well as an athletics venue, but I don’t recall any major championships being held here. Sure it gets the ubiquitous stadium concerts from U2/Rolling Stones/Springsteen and Rugby has featured with Bayonne and Biarritz popping over the border, but as a football stadium? Nah!
Owned by the Municipality, the capacity is only slightly larger than Atotxa at 32,076. The roof undulates and peaks on each side of the pitch, under which sit large two-tiers of seating. These sweep away to the lower ends, which include between their two tiers a third mezzanine level. It does look very attractive and has weathered surprisingly well, but it’s still an athletics stadium with a football pitch in the middle...See what I mean!
A number of plans to alter the lay-out have been considered, the latest emerging in the spring of 2014. This would involve excavating the playing area and extending the lower tier closer to the pitch. Corporate facilities would be expanded and the roof extended to cover the new seating area. This would increase capacity and cost of €40m. This is similar to the work carried out at the Etihad Stadium (Née City of Manchester Stadium) before Manchester City moved in. However, there is one significant difference. The owners, the municipality of San Sebastian & Real Sociedad don't have two euros to rub together. Dreams are one thing, reality is something altogether very different. 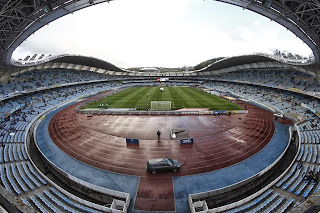 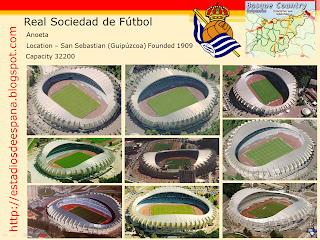 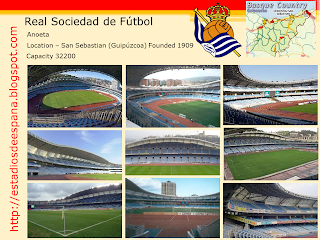