I don't know about you, but I can't help choosing a favourite when a city has two prominent clubs. More often than not I will plum for the lowest ranked as I feel that it is in my footballing DNA to support the underdog. That's what happens when you support Bristol Rovers! I don't think too many Betis fans would dispute their position as underdog, but they certainly have the more colourful history, more interesting stadium and as with all good underdogs, an ability to snap at the ankles of more illustrious opponents. First of all though, let's go back to the beginning, 1914 in fact when Betis was formed following the merger of Sevilla Balompié, formed by Polytechnic students in 1908 and Betis Football-Club, who were formed by a splinter group of disgruntled Sevilla FC members in 1909. Betis FC sought royal patronage in August 1914 and by December of that year had merged with Sevilla Balompié to form Real Betis Balompié.
The club continued to use Betis FC's stadium, the Campo del Prado de San Sebastián, but in 1918 moved to Campo del Patronato Obrero. The first match at the new ground pitched Betis against their eternal rivals Sevilla FC, who ran out 1-5 winners. Fortunately for Betis there were happier times ahead. To start with, Patronato itself underwent a major overhaul in 1924 and again in 1928 when Betis joined La Segunda. This last phase of development saw the building of a grandstand which took the capacity of the ground up to 9,000 and the addition of a tennis club behind the north terrace.
In 1929 Sevilla staged a major Ibero-American trade fair, which saw the construction of a new stadium in the Heliopolis district of the city, which was given the unimaginative title of the Estadio Exposición. With an 18,000 capacity, this open, square sided arena was ideally suited to the up and coming Betis, but it saw its first action on 17 March 1929 with an international between Spain and Portugal. Whilst Betis played a few games at Heliopolis and a number of accounts have them in-situ from 1929, the club continued to play their home matches at Patronato until the end of the 1935-36 season. This is significant as Betis reached the final of the Copa in 1931, won the La Segunda title in 1932 and won their first and only La Liga title in 1935, with home form at Patronato key to the success. 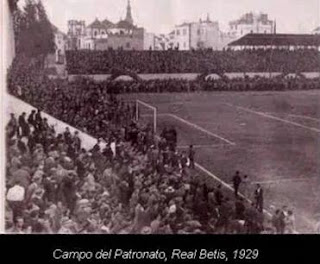 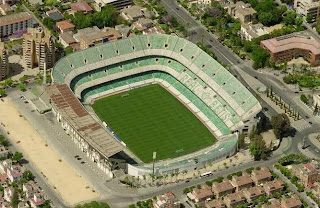 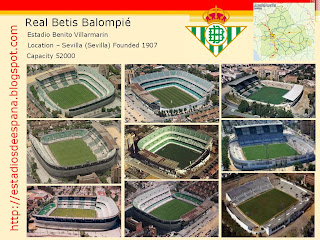 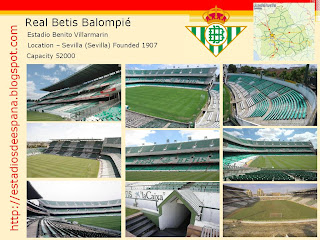