The whole circumstances surrounding Huracán Valencia Club de Fútbol's elevation to the third tier of Spanish Football is more than a little peculiar. You see the team was formed in May 2011 with the purpose of setting up a club in the Valencia area that focused on youth development. The plan was simple - Develop young players and sell them on to larger clubs at home and abroad. Then it all got a bit complicated.

Huracán didn't want to start at the bottom, so they bought a seat in the Tercera off Torrellano Illice CF. Before you get too misty-eyed over Torrellano's plight, they are only a couple of years old and the product of a merger of two teams in the area around Elche. They had accumulated large debts and were on the brink of folding when Huracán came a-knocking. The plan was to pay off Torrellano's debt and move the club to Valencia. There was also a bit of a sweetener, as the package ensured that there were sufficient funds to set up a new club in Torrellano in the regional leagues. The club played their matches at the Estadio Isabel Fernández, about 700 meters from the end of the runway at Alicante International Airport. I think it's about time we had a picture of a stadium...
So far, so contrived. Then, at the beginning of July, it was became more and more apparent that the Spanish Football Federation was experiencing problems filling all the berths in Group III of Segunda B. Alicante CF and CD Castellon had been demoted due to financial inadequacies and doubts surrounded the inclusion of other clubs including UE Lleida. A number of clubs were approached, but they could not find or were unwilling to stump up the financial assurance of around 390,000 euros to take part in the 2011-12 Season. So up stepped the fledgling Huracán CF, who paid the joining fee and had a month to prepare for its first competitive match against Olimpic de Xátiva. There was only one problem. The club didn't have anywhere to play. Huracán CF had entered teams in practically all of the Valencian youth leagues and club president, Tony Hernandez, stipulated that their home stadium must be in the city of Valencia. This has cut little ice with many of the fans of their soon to be rivals, who saw Huracán as a processed club with money, but no history. Many questioned why the backers of the club did not invest in an established team with history and, let's state the obvious, a stadium! Despite the recent debacles involving Granada 74 and Castelldefels, the risk of a repeat was obviously more palatable to the Spanish Federation then running the division with too few teams.
In the end, Huracán found a temporary home with Manises CF, who play their matches at  Campo Vicente Martínez Catalá, which ironically is in the shadows of Valencia Airport. The stadium holds 2,400 and was originally opened in 19 May 1984, when local big-wigs Valencia CF beat Manises 0-10. It features a 30 metre long main stand that has a propped roof. This was re-seated in February of 2011 when the stadium received a makeover. The work also saw the installation of an artificial pitch and a thin line of seats added to the east side of the stadium.
Huracán made an good start to their inaugural season, which was all the more impressive, given the hostility the club has experienced from opposing fans and practically zero coverage in the local media. Rumours persisted about how and why the club was set-up, one favourite being that it has received financial help from the backers of Stoke City. This is probably not helped by the fact that the club play in an identical red & white striped Adidas kit! These rumours will persist until the  Huracán actually deliver on the playing front, but with the club reaching the play-offs in their first season, before losing on penalties to Lucena CF, maybe there is room for a third club in Valencia? 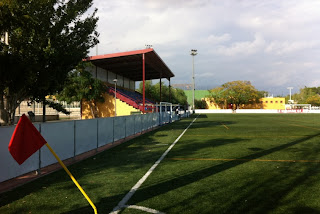