Behind the walls of this ordinary, rather scruffy little ground in the northern suburb of La Chana, lies the cautionary tale of CP Granada 74. It’s a tale of a little team that gambled on a chance in the big time and paid a very heavy price. No prizes for guessing that Granda 74 was founded 1974 and, for the first 20 years of its existence, they played their football at a regional level. Then in 1994, they gained promotion to the Tercera and remained there for 10 seasons, even winning the league in 2003, before losing in the play-offs. They dropped back down to the regional preferente in 2005, but fought back to gain promotion to the Tercera in 2007. Then things started to get interesting.
Granada had not had a team play in the second division of Spanish football since CF Granada’s  relegation in 1988 and, with a population of 235,000, it seemed to be an ideal market to tap into. So thought Granada 74 founder and club President Carlos Marsá Valdovinos, who at the end of the 2006-07 season, bought the financially bereft second division club Ciudad de Murcia for 27 million Euros and moved it lock, stock and barrel to Granada.  Unfortunately for Señor Marsá Valdovinos, buying Ciudad de Murcia was the simple part, as things were about to get a lot more complicated.
Moving the team 140 miles west and keeping the players that were still contracted to Ciudad de Murcia gave him a ready-made second division team, the core of which had finished fourth the season before. The original first team of Granada 74 would become the reserve side and play in the Tercera. However, that scruffy little ground in the suburb of La Chana was fine for the Tercera, but wholly inadequate to stage second division football.  Granada’s main stadium, Estadio Nuevo Los Cármenes, already had 2 tenants, CF Granada and Granada Atletico CF (more about these upstarts later) and the local municipality was not about to evict either.
With time running out before the start of the 2007-08 season, Marsá Valdovinos struck a deal with Motril CF, to play at their Estadio Escribano Castilla, 40 miles south of Granada on the Mediterranean coast. So, no chance of tapping into Granada’s potential fan base then? As you can imagine, things did not go well for Granada 74 in Motril. The average home attendance was 2,700, 500 less than Ciudad de Murcia was getting in their final season in Murcia. The season ended in relegation to Segunda 2b, and when a second disastrous season followed in 2008-09, the club unable to meet its debts, folded.
For the past 2 years, CP Granada has not fielded a senior team, preferring to concentrate on the youth teams. Looking at Ciudad Deportiva Granada 92, you can see why there was never any chance of it hosting second division football.  Little more than four rows of steps on three sides of the ground with a rickety 40 metre long stand on the fourth side, its one unusual feature is the roof that covers the steps. It resembles the type of canopy you’d find outside a 1970’s shopping centre. Behind the ordinary lies the extraordinary. 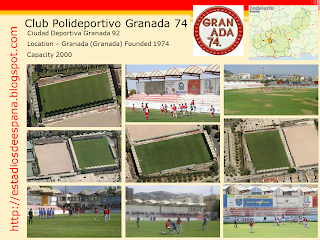