Estadio Escribano Castilla was opened in 1967, when CD Motril moved from La Majuelo to this stadium in the north east of the town. When CD Motril hit the financial rocks and went under in 1983, Motril CF was formed and progressed through the regional leagues to reach the Tercera in 1988. They were promoted to Segunda B in 1997 and for four seasons finished in the lower half of the table. Then, out of the blue, they won the championship in 2001-02. In the play-offs however, they fell to Getafe CF and that was about as good as it got.
The following 02-03 season saw Motril CF finish bottom of the table and they were relegated to the Tercera. There followed nine seasons in the Tercera, with the club reaching the play-offs on five occasions, but failed to progress each time. Then in August 2012, the club folded. The stadium has seen football at a higher level, La Segunda to be precise, when CP Granada 74 (altogether now... booh!) played their home games here in 2007-08. The project failed, with CP Granada attracting fewer regular fans than Motril CF, despite their loftier position.
Named after a former Mayor of Motril, the stadium underwent a face-lift in the summer of 1997 in preparation for their first season at the third level. New seats were installed on all four sides of the ground and the pitch was re-laid. Bright and perfectly functional for a small team, the lay out is similar to a number of grounds found in Andalucia, notably that at Ecija's Estadio San Pablo. 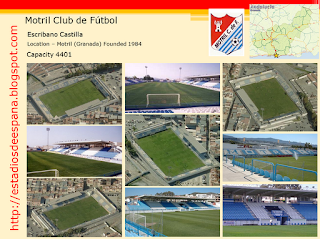