In 1995, Granada CF left the old Los Cármenes and headed 3 miles south to the outskirts of the city and the imaginatively named Estadio Nuevo Los Cármenes. With a new stadium comes the hope of extra revenue and added momentum for the team. Well, if Granada was hoping for an immediate impact, it was sadly mistaken. In the end it took sixteen years to achieve, but finally, Granada made it back to La Primera in 2011.
﻿The new stadium was built at a cost of 2,200 million pesetas in a joint venture between the local municipality and the Junta de Andalucía. The first match took place on 6 June 1995 when Real Madrid played Bayer Leverkusen in a friendly. Granada CF didn’t play their first official match at the new stadium until the following September, losing 0-1 to CD Marmol Macael. In the six seasons that immediately followed the move, Granada CF finished in the top six of Segunda B and qualified for the play-offs on four occasions, but the club could not get beyond the play-offs to the promised land of La Segunda. Then, after a disappointing tenth place finish in 2001-02, the money ran out. The players had gone unpaid for periods of the season and when the debts remained outstanding on the 31 July deadline, the club was automatically relegated. Back in the Tercera for first time in 70 years, and with a hastily assembled squad, Granada CF could not have made a worst start to the season. After 4 games, they stood bottom of the league and had suffered defeats to city rivals Arenas Armilla CD & CP Granada 74. They recovered to make the play-offs but fell at the first hurdle to La Roda CF. It took four attempts in total to escape from the Tercera, but when they finally returned to Segunda B in 2006-07, two other clubs from Granada were vying for pole position and a place in the national leagues.
I’ve already covered the goings-on at CP Granada 74, but in 2005-06, the Directors of Guadix CF, a club 35 miles to the east, agreed a deal with a group of businessmen from Granada and sold their place in the Tercera. Granada Atlético CF was formed and they took up residency at Estadio Nuevo Los Cármenes. For three seasons, they posed a viable threat on the pitch, but had little in the way of a realistic fan base, as the vast majority of Granadinos stuck by the original outfit. Then in the summer 2010, Granada Atlético disappeared after merger talks with Granada CF broke down. So in the space of 12 months, the city of Granada went from  three senior clubs to one. Maybe it was the impetus that Granada CF needed, for whilst newbees Granada 74 & Atlético had bitten the dust, the old-timers  signed a partnership agreement  with Udinese owner Gino Pozzo. The majority of Granada’s squad would become Udinese-owned, while the Italian club sent over its reserves and youngsters. It worked a treat, and two successive promotions followed, ending Granada CF's 35 year exodus from La Primera.
Now a lot of stuff and nonsense is written about the beauty of old stadiums and how bland some new stadiums appear. If you hang around long enough, you’ll see many of those comments on this website, but you won’t catch me talking negatively about Estadio Nuevo Los Cármenes. Designed by Juan José Arenas de Pablo, it is in my opinion, one of the top three stadiums that have been built in Spain in the past 20 years. With an original capacity of 16,200, it consists of four stands, each with three beautifully proportioned tiers. Each corner had a wide access point at ground level and the stands are linked to each other with suspended concourses at each level. Not only did this aid pitch ventilation, it linked all four sides in one symmetrical flow. The stadium also features the most stylish floodlights in La Liga. These slim  masts lean into the stadium and have an unusual oval lamp configuration. Add a backdrop of the Sierra Nevada mountain range and you have a truly graceful piece of architecture in a jaw-dropping location.
The Spanish National Team like the Nuevo Los Cármenes as well. From earlier posts you will know that La Selección  puts it about a bit – playing their home matches across the country, that is. In total, the national team has played at the stadium on four occasions and has clocked up four victories. The first came in September 1995 when they beat Cyprus 6-0. Russia was defeated 1-0 in 1998 and then Bulgaria by the same score four years later. La Roja kept up its perfect record in Granada with a 2-1 win over the Czech Republic in March 2011.
It's taken 35 years, countless players, staff, a new stadium and a whole lot of angst, but Granada are back in the big time and intend to stay. Temporary stands have been erected in gaps between the stands, raising the capacity to 23,156. This is a shame aesthetically, but entirely necessary, as the fans have shown in the lower leagues that they will attend and filling a 20,000+ stadium is entirely feasible. So much so, that the longer Granada can prolong their stay in the top flight, then talk of a new stadium will grow. This might seem like a flight of fancy and Granada would do well to look at others who have struggled to finance such a build, and be aware that good things come in small packages. 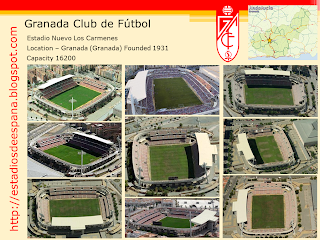 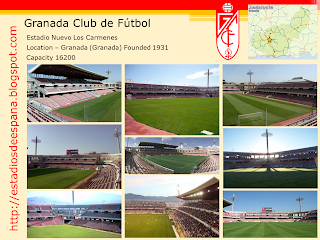