You may never have been to Guadix, or even heard of it, but I bet you'll recognise the countryside. You see the area to the south of this town in the east of the province of Granada, featured in many of Sergio Leone's great spaghetti westerns. Now if you have heard of the local football club however, I doff my imaginary Stetson to you.
The town of Guadix has had a senior team playing in the higher leagues of Andalucía since 1932. The most successful incarnation, Guadix Club de Futbol can be traced back to 1941. They have spent most of their time in the Regional Preferente, but in the 1980’s rose to the Tercera, then in the late 1990’s, played four seasons in Segunda B. They were relegated at the end of the 2000-01 season, a season which also saw the most famous match at the Estadio Municipal de Guadix. On 3 January 2001, Valencia CF visited in the Copa del Rey, and after holding Los Ches 4-4 after extra time, Guadix CF prevailed on penalties. 5,000 fans crowded into the stadium, which is not bad for a town of 21,000 inhabitants. Guadix CF fell to local rivals Granada CF in the next round, but only after another penalty shoot-out.
Back in the Tercera from the 2001-02 season, Guadix CF never really threatened a return to Segunda B, and then in 2006 a group of businessmen from Granada persuaded the directors of Guadix CF to sell their place in the Tercera, and formed Granada Atletico CF.  Left with a football club but no league to play in, Guadix did unto others what they'd had done unto themselves. That is, they popped 50 miles down the road to the town of Illora, and moved their team to Guadix, and Guadix Club Deportivo was formed. A change of name later, and Gaudix Club de Futbol can be found playing in the Regional Preferente at the Estadio Municipal. It’s as if nothing ever happened. The stadium remains unchanged from the work that took place in the 1990’s when it reached Segunda B. The main feature is a short covered stand on the west side. The remainder of the ground is made up of open banks of green seats. Unlike their recent history, the ground is all very respectable and tidy. 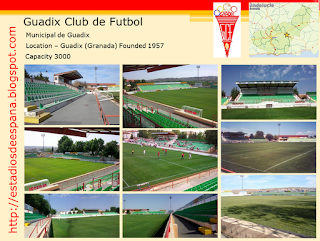