Over the years, the senior football clubs of Lleida have experienced many trials and tribulations, but throughout their ups and downs there has remained one constant, the Camp d'Esports. Built as a gift to the city by the local Republican Movement, it opened on 1 January 1919 and has remained at the centre of all things football in Catalunya's most northern region.
The first club to make use of the Camp d'Esports was Joventut Republicana FC, who not surprisingly were made up of members of the local Republican Party. During the 1920's, Joventut struck up a rivalry with Lleida FC, as both clubs reached Group B of the Campeonato Regional de Catalunya. This came to an end in 1927, when both clubs were dissolved when the league turned professional. During the early 1930's several clubs tried and failed to establish themselves, with Associació Esportiva Lleida Calaveres using the Camp d'Esports until their closure at the outbreak of the Civil War. Soon after the end of the conflict, members of the the city's former clubs formed Lérida Balompié who made their way through the regional leagues to reach the Tercera in 1943. During this period, the club developed a rivalry with the nationalist sponsored CD Leridano and in March 1947 the two clubs merged to form Unión Deportiva Lérida. The Camp d'Esports, which had fallen into disrepair, was renovated, which is just as well as the club was about to embark on a remarkable rise to the top flight.
The combined talent of the two teams soon proved too strong for the Tercera and in 1948-49, the club won the Group III title and progressed to the play-offs. Although not disgraced, UD Lérida finished third, behind Albacete Balompié and Atlético Tetuán, which ruled out promotion to La Segunda. However, in the close season the Federation had a change of heart and decided to extend the second tier, and UD Lérida was incorporated into the new regionalised format. Competing in the northern section, the club proved to be a worthy addition, finishing runners-up to Racing Santander. In the final match of the play-offs, UD Lérida beat Real Murcia 4-1 to secure a place in La Primera. The Camp d'Esports had gained a north terrace in the summer of 1949 and in preparation for the club's debut in the top tier, a new grandstand was built on the west side of the ground. On 10 September 1950, UD Lérida entertained Celta Vigo at the Camp d'Esports in its first La Primera match. They lost 2-3 and soon slipped into a run of form that saw the club run up one of the worst records the top flight has witnessed. When the season was over in April 1951, the UD Lérida goal had been breached a record 134 times, and the club finished bottom of the table with just 13 points.

Chastened by their top flight experience, UD Lérida spent the next six seasons in La Segunda, before dropping off the footballing radar with a descent into the Tercera in 1957. The development of the Camp d'Esports continued however, and in 1962 a new propped cantilevered roof was added to the grandstand and a year later, the first floodlights were switched on. The club made a three season return to La Segunda in 1965, but by 1970 it was in the Catalan regional leagues. There followed a period of six seasons back in the Tercera, before debuting in the newly formed Segunda B in 1977-78. By now, the stadium had gained a new eastern & southern terraces and was a perfectly respectable stadium for life in the third level of Spanish football. Taking the Catalan name of UE Lleida, the club gradually improved its position in Segunda B, culminating in promotion back to La Segunda in 1987. The club dropped back into Segunda B for the 1989-90 season, but under the guidance of José Manuel Esnal “Mané”, the league title was secured and promotion to La Segunda set the club up for the 1990's and its second golden era.
Coach “Mané” had a seven-year period in charge of UE Lleida, the highlight of which was a second division title and promotion back to the top flight in 1992-93. During the summer of 1993, the club & municipality embarked on an ambitious plan to rebuild the ageing stadium. Under the guidance of architect Robert Brufau, the the west grandstand and eastern terrace were replaced with twin-decked seated stands. Using prefabricated sections, the build quickly took shape, the west with an impressive roof and the east with a curved anfiteatro. Whilst the 93-94 season was a lot less traumatic than the club's previous venture in La Primera, it still ended in relegation, despite wins over Real Madrid at home, and Barcelona in the Camp Nou. During the summer of 1994, the northern terrace was replaced with a twin decked open stand and the southern end was converted to seating. The club came desperately close to an immediate return to La Primera, but lost 4-5 to Sporting Gijon in the end of season play-offs. The remainder of the 1990's was spent in the top half of La Segunda, but by the end of the 2000-01 season, UE Lleida had overstretched its resources and deep in debt, it plunged into Segunda B.
Over the next decade, the club made a series of desperate attempts to return to the second division. They did manage a two season spell back in La Segunda from 2004-05, but with the success built on foundations of clay, it all soon fell apart and by the end of the decade, the club was struggling to compete at the top of Segunda B. The 2010-11 season was played against a backdrop of growing financial woes, yet despite this, the club remained serious play-off contenders, until defeat to Mallorca B in the penultimate league match, dashed any hopes of promotion. A week later on 15 May 2011, Unió Esportiva Lleida played its last ever match, a 0-0 draw away at CE Hospitalet. The club was wound up after accumulating debts in excess of 28 million euros and its place in Segunda B was placed up for auction. Luckily for the footballing folk of Lleida, local businessman Sisco Pujol acquired the licence and set up Club Lleida Esportiu. So in August 2011, Lleida Esportiu took their place Group III of Segunda B.
After all the fiscal fiascos that have dogged the recent history of the club, it comes as a relief to talk about the stadium, and I have to say that I like the Camp d'Esports. Built in haste, it could easily have become a prefabricated non-entity. Brufau's design however, is lively and distinctive. The west, north and east sides feature double-decked seated stands, but it is the west stand's roof that lifts this re-build above the ordinary. This structure stands high over the upper deck, but rather than being supported by cantilevered struts along the back of the stand, two huge supports pierce through the upper seating deck and hold the roof aloft like a champion weightlifter. To accommodate this unusual design, the upper level has two large voids cut into the deck. The opposite east side features a sculpted anfiteatro, which also features large voids come vomitories. These however are for effect rather than functionality, but along with the curve, add to the stand's pleasing proportions. The north end of the stadium also features a twin-decked stand, the upper tier of which hangs over part of the city's velodrome. The southern end is a single tier of seating, which is a continuation of the lower ring of seating.
The city of Lleida came mighty close to not having a senior football club, and whilst the new club is a long way from emulating the deeds of its predecessor, it can rely on the Camp d'Esports to provide a distinctive and atmospheric home as it plans for the future. 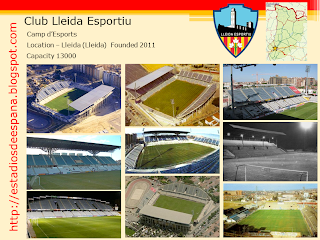