One of the benefits of developing this website is that you build an integral knowledge of exactly where a particular city is in Spain. This proves particularly useful when you avoid flying Ryanair to Barcelona, as you will end up 65 miles to the south west of the Catalan capital, between Tarragona and Reus. Still if you do end up in south west Catalunya, why not visit the other Camp Nou, home of Club de Futbol Reus Deportiu?
CF Reus is one of the older teams in Catalunya, having got it together back in 1909. In 1917 they joined forces with Club Velocipedista & SC Olimpia to form form Reus Deportiu. A Year later they joined the Catalan Football Federation  and won the Catalan second division title in 1923 & 1924. The football arm of the club moved to a new field on Calle de Gaudi in 1927, but progress was halted by the outbreak of the Civil War. In the 1940's the club reached the Tercera, but soon afterwards fell on hard times and with finances tight, fell into the Catalan Regional leagues. In 1951, the sports club split into two separate entities, with CF Reus Deportiu focusing on football.
CF Reus spent much of the next three decades switching between the Tercera and the regional leagues and in October 1977 the club opened the Camp Nou. A first Tercera title arrived in 1981 which led to promotion to Segunda 2b for the first time. A comfortable fourteenth place finish was achieved in 1981-82, but the following season was a resounding failure, with the club finishing bottom of the table with just 17 points. 1984 saw the sale of the Camp Nou to the Municipality and there followed 20 years of Tercera and regional football. Then in 2002, out of the blue, Reus finished third in the Tercera and qualified for the play-offs to Segunda B. Here they totally dominated the qualifying group which featured Villajoyosa, Atletico Baleares and Yeclano.
Hopes were high that this latest visit to Segunda B would last longer than the stay in the 1980's. Alas, whilst Reus battled hard throughout the 2002-03 season, an eighteenth place finish was three points from safety. The club returned to the Tercera for two seasons before more success in the play-offs saw the club return to Segunda B. Constancia and Mar Menor were beaten in the play-offs, but in the 2005-06 season, CF Reus served up some familiar fayre; battling hard, but ultimately failing to avoid the drop. Since their return to the Tercera, CF Reus have finished in the top four in each of the last five seasons, but have failed to navigate their way through the play-offs, until this year that is. After beating Universidad de Oviedo and Naxara, CF Reus ran out 3-0 winners over two legs against CD Comarca de Níjar and will start 2011-12 in Segunda B.
Unsurprisingly, the Camp Nou in Reus is at the opposite end of the scale when compared to its more illustrious namesake 65 miles up the coast. Holding 4,500, the main feature is the west Tribuna, although it looks more health centre than sports centre from the outside of the ground. Inside however is very smart. Dating from 2004, the white cantilevered roof replaced a rather rickety cover that resembled the canopy of a burger van. The back tier of the stand was also replaced and it now features 8 rows of multicoloured seats and impressive media facilities. The lower tier of six rows of seats extends around the pitch, narrowing to four rows behind each goal. The east side has an elevated second tier, curiously separated into four boxes, behind which is the club's training facilities. Over the past decade the club and its ground has matured into one of the better set-ups in the Catalan Tercera, and maybe it's is ready for the next step to Segunda B. Let's hope that the visit is not as fleeting as the last three occasions. 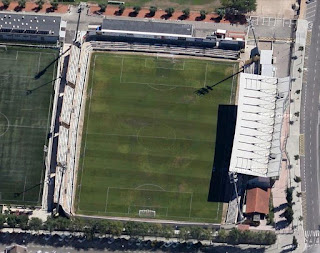 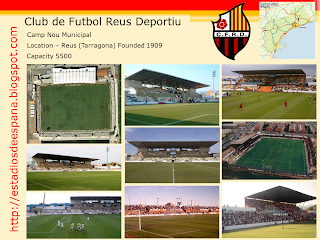