How can you lose something as large as the roof of a football stand and not say anything about it? That’s what Villajoyosa Club de Fútbol did a few years back and not a word about it to anybody. It was there as bold as brass one week and gone the next. Let me present the evidence.
Villajoyosa CF is based in Vila Joiosa, the first town you come across travelling south out of Benidorm, along the Costa Blanca. Formed in 1944, it has spent most of its history in the Regional leagues, then in 2003-04 it won promotion to the Segunda B. To say that this caught the club by surprise is borne out by the fact that the club's Estadio Pla stadium was quite possibly the most basic ground to appear at this level in the past 40 years. It had some changing rooms, floodlights and around 50 temporary seats behind one goal.
Work started in the summer of 2004 to build two new stands at the ground and in early 2005 the Estadio Nou Pla was unveiled. The main stand on the west side of the ground is the largest and includes changing rooms and press facilities. A sail-like cantilevered roof runs from the north-west corner to just past the half-way line. The seats continue towards the south-west corner giving the stand a capacity of approximately 1700. The club obviously liked the previous arrangement of a few seats scattered at the north end of the ground, as the redevelopment has placed a thin wedge of seats behind the north goal.  On the east side is an open bank of 750 seats that run from the south-east corner northwards to just past the half-way and this is the stand that has lost its roof. You want proof do you? OK here we go...

I can find no mention on the clubs website, or local council of any demolition of the roof. No planning regulations broken, health and safety guidelines ignored or news of a catastrophic gale that whipped off the roof and plonked it on a nearby building site (Vila Joiosa has a lot of building sites). So it was there during the 2006-07 season, then gone by July of 2007. By the end of 2007-08, Villajoyosa was relegated to the Tercera, came back to Segunda B in 2009, only to be relegated once again. There followed a disastrous season stuck to the bottom of the Tercera, before relegation to the Regional Preferente. It’s just a shame that the roof wasn’t as firmly anchored. 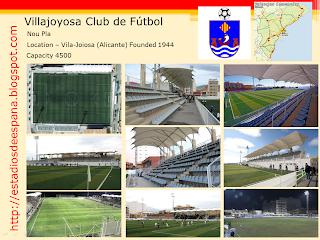