There must have been several times during the history Terrassa FC that their fans have thought they were on the cusp of the big time, only to see a large "Failure to Launch" sign illuminate and the inevitable commencement of a slip back down the leagues. Terrassa has a population of 210,000 and lies 18 miles north west of Barcelona and 5 miles west of Sabadell. You would think that given it's size and proximity to so many footballing hot-beds, something would have clicked, but in over a hundred years of footballing action, the club has mustered a couple of Copa Catalunya's and 15 seasons in La Segunda.
Formed in 1906 by students of Terrassa's School of Industrial Engineering and playing under the name of Young's Foot-Ball Club, the team played in the school's grounds until 1910, when due to urban sprawl and large crowds, they moved to Campo del Canonget. In May 1911, the club changed its name to Tarrasa Football Club, its colours from red and white to white and blue and joined the Catalan Football Federation. Soon, Campo del Canonget was too small for the crowds they were attracting and on 2 March 1913, the club inaugurated a new ground at Calle Pi y Margall, which would later be known as Campo del Obispo Irurita. The club made steady progress in the Catalan leagues, reaching the second division or Primera Categoría B in 1915. It finally made it to the top division for the 1924-25 season and finished in a very respectable fourth place. By the time the Spanish national league started in February 1929, the club was struggling on the pitch, finishing bottom and relegated from the Catalan top division, and losing players to the professional ranks.

Terrassa spent nearly all of the 1930's in Primera Categoria B, winning the league in in three successive seasons from 1932 to 1935, but failing in the play-offs. It finally reached Primera Categoria A in 1940-41 and in the following season won the league. This coincided with a restructuring of the national leagues and Club Deportivo Tarrasa, as they were now known, found themselves in La Segunda for the first time. In Group II of a regionalised league, Terrassa finished fifth out of eight teams and due to another reorganisation of the league, had to play in a relegation play-off group, featuring amongst others Deportivo Alaves, Alcalá SD and CD Tudela. Needless to say, Terrassa was relegated to the Tercera, where they remained for another 11 years. A first Tercera title arrived in 1953-54 and direct promotion to La Segunda was the club's reward, which was a relief given their failure to navigate the play-offs at the end of the previous three seasons. This saw the start of the most important period of the club's history with seven consecutive seasons in the second tier and a move in August 1960 to the clubs present home, the Estadio Municipal de Deportes. During this spell, Terrassa never truly pushed for promotion to La Primera, or with the obvious exception of their final season, were they threatened by relegation.
The new stadium with its 20,000+ capacity would have been impressive for La Segunda, unfortunately it would not see second flight football for another 14 years. Between 1961 and 1974 Terrassa won another 2 Tercera titles and visited the play-offs on no fewer than nine occasions without success. A fourth Tercera title was achieved in 1974-75, and thanks to another restructuring of the league, no play-off was required to reach La Segunda, which is probably just as well. In their first season back in the second flight, Terrassa ironically found success in a play-off, this time a relegation play-off against AD Almeria, although it did require the Andalusian's to be disqualified for fielding ineligible players. 1976-77 saw a seventh place finish, but by 1979-80, the club had dropped to Segunda 2b. Relegation to the Tercera followed in 1982 and by the time the Estadio Municipal de Deportes was refurbished for the 1992 Olympic Hockey Tournament, the club was playing in the the Catalan Regional Preferente.
The refurbishment saw the existing terraces refaced and  seats installed. Over the west side the rather basic, short pitch roof was replaced with a huge 130 metre long cantilevered roof. The roof follows the curve of the seating and at 22 metres deep, provides good cover for the seats on all three tiers. The grass pitch was replace with AstroTurf and a disappointingly neutral shade of beige was chosen for the 11,500 seats. New floodlights were installed on four corner rigs that leaned toward the pitch on rigs that resembled parallel bars.
We've seen it before, a team being inspired by new surroundings and Terrassa was no exception, winning the Catalan Prefente and Tercera in quick succession. Segunda 2b was to prove a harder proposition and the club's play-off hoodoo returned to haunt them after finishing second in Group III of Segunda 2b in 1997-98. In a group featuring Malaga CF, Talavera CF and SD Beasain, Terrassa entered the final match at Malaga's Rosaleda stadium needing just to avoid defeat by less than 2 goals to win promotion. The rug was pulled from beneath them with a disastrous 4-1 defeat and the club took another four seasons to reach the play-offs again. Terrassa reached the 2001-02 play-offs via the back-door when Real Zaragoza B was unable to compete due to their senior team's relegation to La Segunda. So fifth place was enough to see them enter a group with Barakaldo, AD Ceuta and Hercules CF and Terrassa swept the board, setting a record by winning all six matches and with it, promotion to La Segunda.
The stay in La Segunda lasted three years, finishing a respectable twelfth in the first two seasons. However, back in Segunda 2b from the 2005-06 season, a slow decline set in with diminished returns at the end of each season. In June 2009 and with the club in the financial mire, it was sold to T F.C. Sports thus becoming the first club in Spain to be owned by a Limited company. With the players outstanding wages settled and a loop-hole in the Federation's ownership laws exploited, the club continued in Segunda 2b for another season. It was not a happy year, as the club was bottom of the league throughout the campaign, winning just six and drawing seven of its 38 matches, before dropping to the Tercera. In 2010 Terrassa Olímpica 2010 SAD was formed and acquired the rights of the former rights, which in effect bought the history and ensured continuity.
Since the 1992 re-fit, the Estadi Olimpic has always been perfectly functional, but a bit dull. Highlights have included a 13,000 attendance against Levante in 2004 and 12,000 to watch Real Madrid in the last sixteen of the Copa del Rey. The municipality has added a dash of colour to the stadium by painting  the walls between the tiers and the vomitories bright red. Unfortunately, its going to take more than a coat of paint to brighten up Terrassa FC's future as they currently linger in Group 5 of the Tercera with a serious question mark over its continued existence. 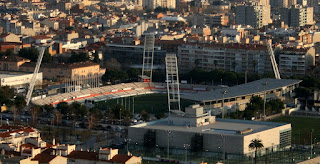 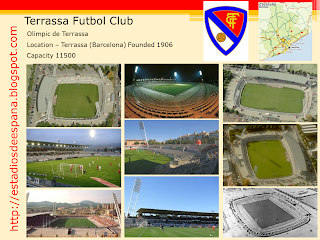